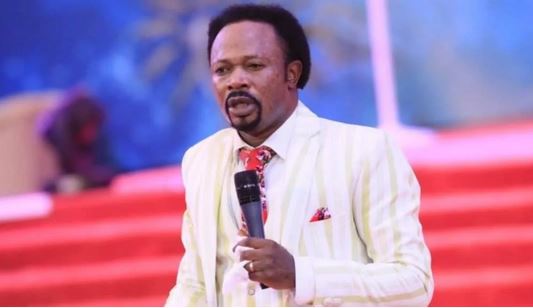 Controversial Nigerian pastor, Prophet Joshua Iginla, the General Overseer of Champions Royal Assembly, Abuja, is savouring the joy of his marriage to

Controversial Nigerian pastor, Prophet Joshua Iginla, the General Overseer of Champions Royal Assembly, Abuja, is savouring the joy of his marriage to his new wife who he got married to in 2020 after divorcing his wife of 10 years, Yemisi Iginla.

His new wife was delivered of a new baby boy, his second son with his new wife, about two weeks ago and Iginla has been over the moon since the arrival of the tot. His has since named his son, Majemu Majesty Iginla who was dedicated at the South Africa branch of his church.

In 2020, Iginla had personally announced on his church’s pulpit, the end of his marriage to Yemisi. Both of them were not only adulterous in their marriage, they both had children outside of wedlock. Iginla fathered a child named Rehma with his now second wife, Zimasa Ndamase, a wealthy South African while still married to Yemisi and she in turn bore a child for another man. Infact court documents allege that Iginla may have married Ziamasa in 2014 in a civil ceremony that they both kept secret.

While Iginla forgave Yemisi, hoping to continue living with her as man and wife, she refused to forgive him and made life unbearable for him. Thus began the end of their marriage. Like her husband, Yemisi has also moved on and remarried.