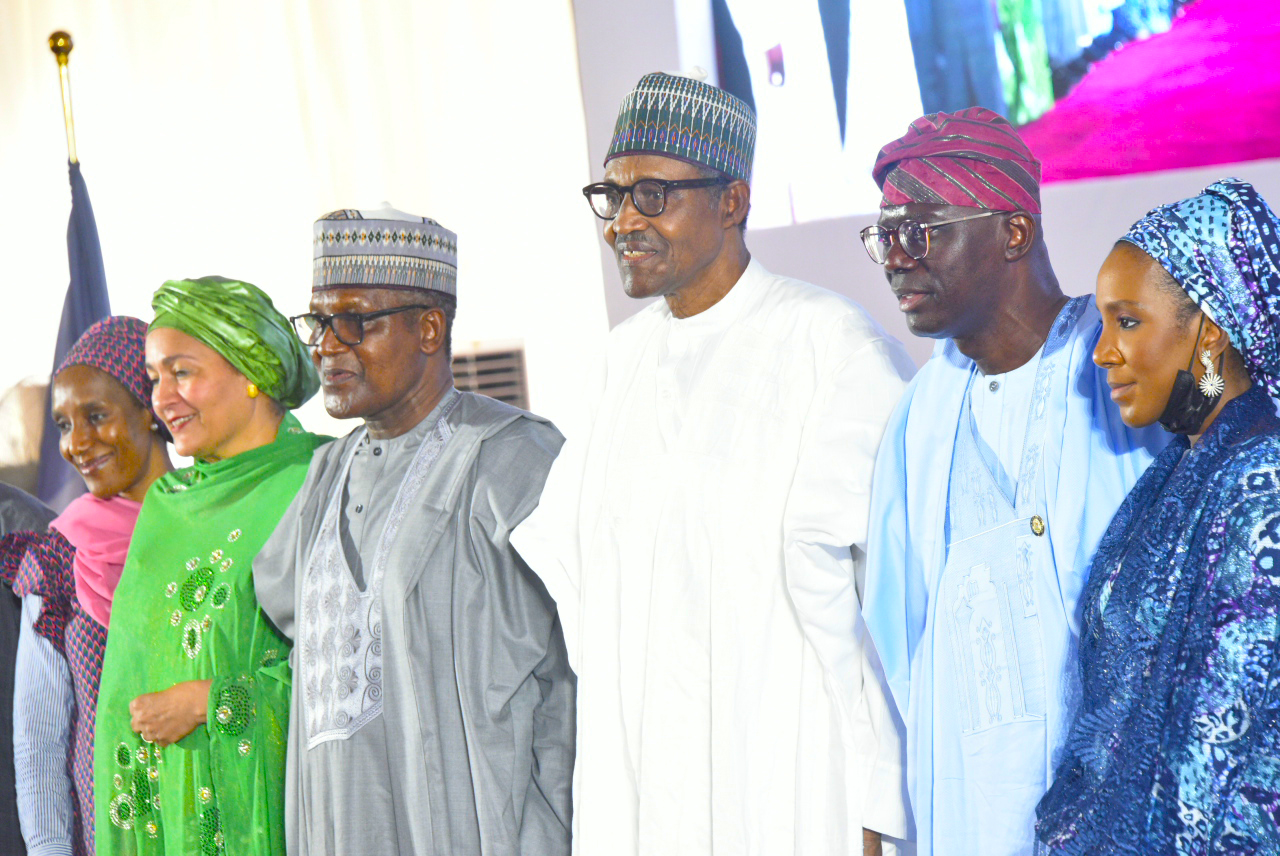 President Muhammadu Buhari today commissioned the new 3 million Metric Tonnes capacity per annum state-of-the-art Dangote Fertiliser Urea Plant, with an emphatic assurance that the project would give a huge fillip to Nigeria’s agricultural sector, which revitalisation has been a focal point of his administration’s economic policy.

The new plant, which he commissioned in the presence of some 18 governors, ministers, captains of industries as well as prominent traditional rulers, is located at Ibeju Lekki, Lagos Free Trade Zone within the periphery of the Dangote refinery.

A visibly excited President Buhari said the coming on stream of the plant would create huge opportunities in the areas of employment, trade, warehousing, transport and logistics. The Plant, according to the President “will greatly create wealth, drastically reduce poverty and secure the future of our nation”.

He said, “In the agricultural sector, another focal point of our economic policy, we expect a boom as fertiliser is now readily available. Many Nigerians who hitherto practiced subsistence farming because of non-availability of necessary inputs can now take up agriculture as a business. We expect a rise of new breed of agropreneurs who will add value to farming and make the nation self-sufficient in food production.”

According to him, the federal government is now determined more than ever before to provide enabling environment for private sector investors to thrive, adding that his government would continue to improve on infrastructure, power, security and enact relevant laws and regulations that would drive investments in the economy.

President Buhari reiterated that part of the government’s effort in this regard was the partnership with the private sector government via a tax credit scheme, in the rehabilitation of roads across Nigeria under the Presidential Order No. 7.

“As we all know, good roads contribute to easy movement of goods and services across the nation, thus reducing cost of doing business and improving productivity. We are also rehabilitating our railway lines and building new ones to lessen the burden on our roads and create more effective multi-model transportation networks,” he added.

In an earlier welcome address, President of Dangote Group, Aliko Dangote described the new plant as a game changer, as it has the capacity to make Nigeria become self-sufficient in fertiliser production, with spare capacity to export to other markets in Africa and the rest of the world. He added that already, Dangote fertiliser has reached the markets in the USA, Brazil and Mexico.

According to him, the Fertiliser plant, which is the largest granulated  Urea fertiliser complex in Africa, occupies 500 hectares of land, was built at a cost of

$2.5 Billion, and is expected to reduce drastically level of unemployment and youth restiveness in the country through employment opportunities. To him, the plant is expected to generate new jobs with top quality fertiliser being available and in sufficient quantities for the farmers.

He stated that agriculture accounts for 20 per cent of the nation’s GDP and that the new plant was an ambitious project that would provide both direct and indirect employment, thereby reducing youth restiveness

Dangote Fertiliser, according to him, would ensure emergence of farmers in the country, providing hundreds of jobs and ushering in a new era of agricultural entrepreneurs, (agroprenuers). “This breed of agroprenuers will take to farming on large scales, providing food and raw materials for our industries,” he added.

Dangote stated that the fertiliser plant is rolling out with innovations that would transform the agricultural sector in the form of extension services for small and medium scale farmers. It has set up a well-equipped fertiliser soil testing laboratory to enable it analyse and identify soil deficiency and the appropriate fertiliser blend.

“Studies have shown that applying the right fertiliser to the soil will boost productivity. This service is to cover all the geopolitical zones, and will surely change agricultural landscape in the country by transforming farming into a lucrative profession.

“Dangote Fertiliser is working with Farmer Associations, Corporate Farmers, NPK Blenders, NGO/development partners and State Governments all over Nigeria, and governments across Africa and beyond who are looking for sustainable approach to improving soil quality and farm yields,” he explained.

Speaking at the occasion, Governor of Central Bank of Nigeria, Godwin Emefiele said Nigeria is indeed indebted to Aliko Dangote for his giant stride to add value to Nigeria’s economy. According to him, “It is great that a Nigerian has taken not just this great initiative of helping to solve our perennial problem of importing petrochemical products including fertiliser but has taken advantage of the emerging huge market opportunity presented by recent global developments.”

Emefiele commended President Buhari for providing all the support needed to put in place economic policies that would reverse the trend of the doldrums, pointing out that the completion of the fertiliser plant is a stellar example of the realisation of the vision.

The CBN governor described the fertiliser plant as timely considering the recent developments in the global market, where prices of wheat, fertiliser and crude oil spiked by over 20 per cent, following the start of the Russia – Ukraine war.

“In addition to the lessons we learnt from the protectionist actions of countries during the early days of COVID-19, this investment is again a glaring testament to the foresight and tireless efforts of Mr. President in encouraging domestic production of items that can be produced in Nigeria, especially agriculture. This would not only help to enable greater productivity of our agricultural sector but also help in insulating Nigeria farmers from depending on imported fertiliser,” Emefiele stated.

“Then President Buhari inaugurated the Presidential Fertiliser Initiative and charged them with resolving this problem. With sustained efforts, other indigenous companies like Indorama and Notore with a combined capacity of over 2.5 million tonnes per annum have tried to match the market demand, yet the country still faced a huge shortfall of fertiliser supply. Today, Nigeria is self-sufficient in the production of urea, and we are also the leading producer of urea in the African continent,” he added.

The Minister of Agriculture, Dr. Mahmood Abubakar called on other investors to rise up to the occasion, noting that the Dangote Fertiliser would help to solve the problem of fertiliser shortages in Nigeria. He also assured that the government would enforce standard in the industry to maintain quality.

Lagos state governor, Mr. Babajide Sanwo-Olu commended Alhaji Aliko Dangote for always blazing the trail, noting that Lagos state government was happy to be hosting many of his businesses. He added that, “with the largest fertiliser plant in Africa in Lagos and the largest refinery in the world coming soon, there is nobody that would not be proud of Alhaji Dangote.”

The governor stated that Nigeria would quickly forget its many economic problems if another entrepreneur like Dangote could be replicated in other regions of Nigeria.

Sanwo-Olu also said that private investors could always count on Lagos State government when it comes to provision of an enabling environment to make businesses thrive. 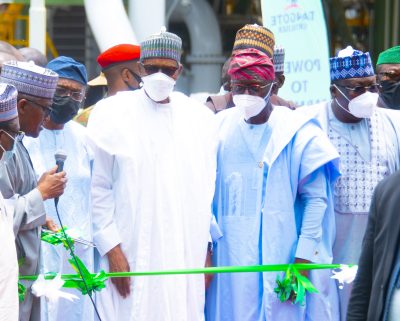