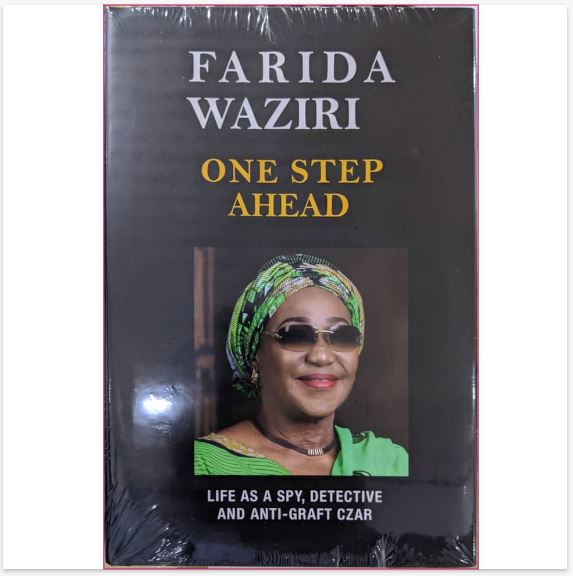 ‘One step ahead: Life as a spy detective and anti-graft czar’ by Farida Waziri

'One Step Ahead-Life As A Spy Detective And Anti-Graft Czar,' written by a former Chairman of the Economic and Financial Crimes Commission, EFCC, Fari

Magu regains freedom after 10 days in detention
Presidential panel grills ‘Magu Boys’, EFCC directors
Jonathan’s Power minister, Wakil sent to prison for mismanaging PHCN funds
‘One Step Ahead-Life As A Spy Detective And Anti-Graft Czar,’ written by a former Chairman of the Economic and Financial Crimes Commission, EFCC, Farida Waziri, is a book where the police officer renders her account as a security officer.
Presenting her mosaic experience as a special branch operative, pioneer head of the Special Fraud Unit (SFU), as a detective at CID, as commissioner of police, as former chair of EFCC, as wife of Nigeria’s ambassador to Turkey, and as a lawyer that sat through one of the stormy moments of this country and witnessed first-hand behind-the-scene happenings that form part of Nigeria’s development history, the book is simply put the story of her life put together to fill some gaps in the history of the country.
According to Waziri, “Myths and mythologies about Nigeria’s endemic corruption are due to the chameleonic forms of the scourge. I had the privilege to dissect the problem from the vantage position of being at the helm of SFU and EFCC and I have simplified the anatomy of fraud and public office corruption in Nigeria.
“The trove of facts in the book belongs to the public. I have simply held them in trust for so long. I have no right to covet them. And having held them for so long, I have decided it is time to declassify them by putting them into a book form. This is the main motivation for the memoir. I have written this book, not as a rejoinder to past polemics or false accusations and fabrications against my personality by individuals, groups or institutions.”
Farida Waziri’s appointment in May 2008 shortly after Nuhu Ribadu was booted out was clouded by allegations that she was sponsored by ex-governors such as James Ibori and George Akume, former governor of Benue State, to cover up their money laundering and fraud charges before the commission.
Waziri failed to secure convictions for high profile cases involving former governors already instituted by her predecessor. Her appointment, at the time was at the instance of Bukola Saraki, former Kwara State governor, Ibori and Akume; all of who had corruption cases with the EFCC at the time and continue to do so in 2020.
Book of the week 70 Book 1 EFCC 114 Farida Waziri 2