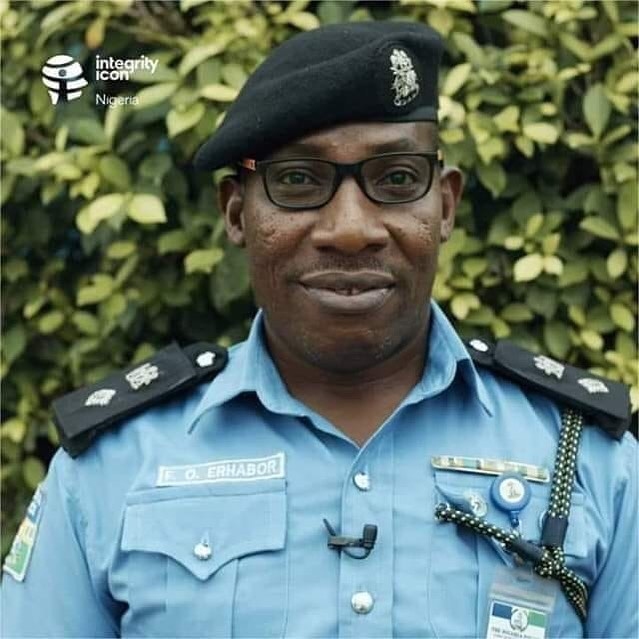 Chief Superintendent of Police (CSP), Francis Osagie Erhabor, the Divisional Police Officer (DPO) in charge of D Division Itam, Uyo, Akwa Ibom state, is a rare shining light in the midst of thick darkness that hovers around the Nigeria Police Force. The Police officer is reputed to have never taken a bribe in his 29 years of active service.

Despite Police authorities’ insistence that ‘Bail is Free’, it’s not what is obtainable at most of their stations where detained individuals have to pay through their nose to secure their release. As opposed to the regular practice the Police in Nigeria are known for, in the division where CSP Erhabor heads, bail is free and no policeman dares take a bribe from community members.

His officers are said to have earned the trust of the community for their stand on integrity and this has gained the needed support and collaboration to fight local crimes. He is also very involved in community projects and mentoring young people.

While on duty as the pipeline commander in Edo State, Erhabor reportedly refused bribes of N1.5m offered to him weekly from four individuals who were involved in illegal oil bunkering. In addition, he also rejected N500,000 per week, as returns from his subordinates, given to them as bribes to allow adulterated petroleum products to be brought into the state.

Rejecting these tempting offers allegedly earned him several enemies, especially considering that his supposed N37,500 monthly allowance was not steady. This is rare professionalism not always associated with the Nigeria Police Force. The Police are reputed to be abusers of privilege and serial abusers of citizens’ right. Nigerian police officers are considered some of the most brazenly corrupt in the world. They routinely set up “extortion roadblocks”, where they sometimes torture and kill for bribes.

In a public survey released on March 26, 2019, by the Socio-Economic Rights and Accountability Project (SERAP) on high levels of corruption in public institutions in Nigeria for the past 5 years, the Police emerged as the most corrupt of the five major public institutions surveyed. According to the survey, “a bribe is paid in 54 per cent of interactions with the police. In fact, there is a 63 per cent probability that an average Nigerian would be asked to pay a bribe each time he or she interacted with the police. That is almost two out of three.”

In an institution rife with wanton corruption, it is refreshing to find a honest character like CSP Erhabor, plying his trade in there. According to the Police officer, his belief in integrity stems from the trust and respect he has earned from the community he serves, which make his job easier. He advocates “standing for truth even when no one is on your side”.

In the future, he hopes to actualise a Police Force that is the dream of the citizenry; where Nigerians and Police officers enjoy a harmonious relationship. In December 2018, Erhabor was honoured with the 2018 Integrity award, which was sponsored by Youth Alive Foundation (YAF), meant to openly reward some Nigerians irrespective of profession who have shown high discipline and integrity in their official and unofficial engagements.

With more officers like CSP Francis Osagie Erhabor in the Nigeria Police Force, no doubt there’s hope for a resurgent Force that prides itself on integrity and professionalism.