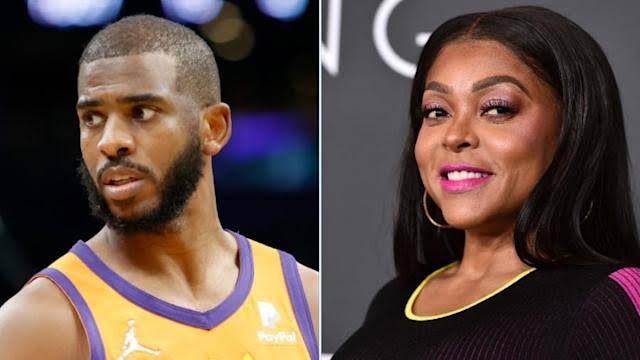 US president, Joe Biden has appointed Hollywood actress, Taraji P. Henson and Chris Paul as two of the nine men and women to be on the HBCU advisory b

MURIC threatens Falz with legal action, asks him to withdraw ‘This is Nigeria’ video
Nollywood producer and director, Theodore Anyanji is dead
Kim Kardashian and Kanye West to try for baby no 3 with surrogate

US president, Joe Biden has appointed Hollywood actress, Taraji P. Henson and Chris Paul as two of the nine men and women to be on the HBCU advisory board.

The White House made the announcement that the actress and sports agent are among the people appointed to the President’s Board of Advisors on Historically Black Colleges and Universities.

The board is tasked with advancing the goal of the HBCU Initiative, which was reestablished in 2021.

They aim to “increase the capacity of HBCUs to provide the highest-quality education to its students and continue serving as engines of opportunity,” according to the White House.

Taraji who studied acting at Howard University, and launched the Boris Lawrence Henson Foundation in 2018, shared the news of her appointment on her Instagram page.

Boris Lawrence Henson Foundation created in honour of Taraji’s late father is known to give scholarships to African-American students majoring in mental health and works to lower the recidivism rates of African-American men and women.

More support for HBCUs has been part of Biden’s domestic policy agenda since his campaign for president.

The White House shared that the administration has committed $5.8 billion in support to these HBCUs through a combination of pandemic relief funding, grants and forgiving capital improvement debt.

However, last year, he proposed increased funding for HBCUs but his full proposal was not passed by Congress.

Loading...
Newer Post
How I was raped by robbers in my boyfriend’s house – Elvina Ibru
Older Post
Joke Silva’s daugher in-law, Blessing Douglas reveals her marriage is over