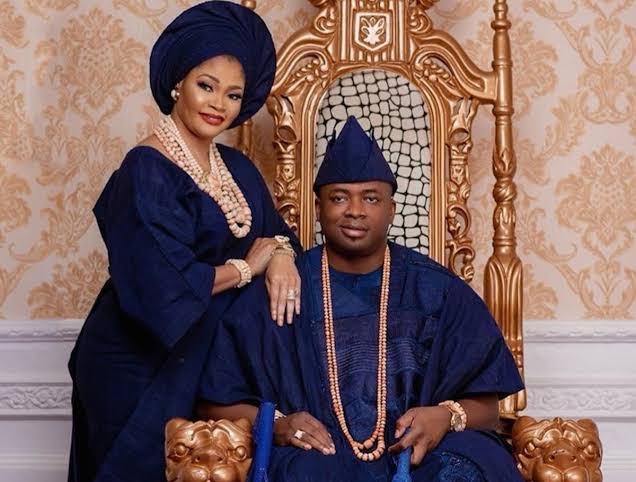 Olori Sekinat Elegushi, the first wife of His Royal Majesty, Oba Saheed Ademola Elegushi, Kusenla III, the 21st Elegushi of the Ikate-Elegushi Kingdom, is opening up about how she coped with her husband taking a second wife.

Oba Elegushi married Olori Sekinat who is celebrating her 46th birthday, in 2003 after many years of courtship.

The union is blessed with three daughters.

Hadiza who is a daughter to Northern elder statesman, Alhaji Tanko Yakassai is also a top executive at Cratos Energy Resources Limited, an oil and gas company.

In an interview with Kewhenon Blog, Olori Sekinat, said the news of a second wife came around when her mother died. Yet, she said she still had to deal with the fact that the man she loved was marrying another woman.

“I didn’t marry a king, I married a young man, who I love, and we were growing together managing and planning. It was hard then, but I realised that some of these things come with the demands and pressure of the throne.

“Why then continue to worry about it? The moment he became a king, I knew issues like this would come up, but I have to support and stand by him,” she said.

Olori Sekinat admitted that when her husband was nominated for the throne, she feared he would take a second wife.

“Part of my fear was that he would take another wife. Then, I was pregnant with our third child. When he was crowned, I returned from abroad early with the baby to be with him for the coronation and other rites.

“Initially, it was a bit challenging as there were many demands, which I wasn’t used to, but since I was familiar with some of the palace procedures and the people there, we were able to settle down,” she added.

Loading...
Newer Post
LCCI hails Dangote on provision of infrastructure, job creation
Older Post
‘We have no record of Bola Tinubu ever in our employ,’ Deloitte US reveals