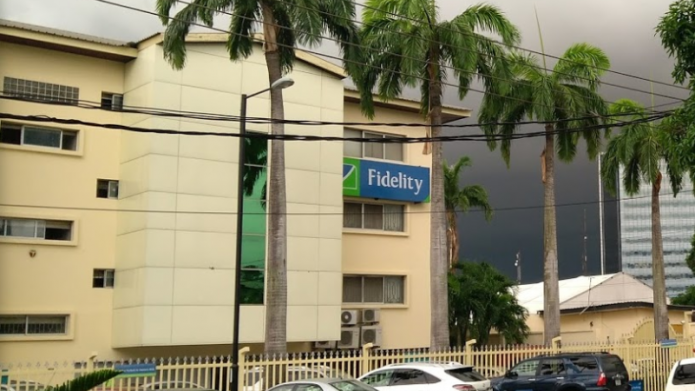 Fidelity Bank clarifies reports of man singing outside its branch

Fidelity Bank Plc has reacted to a viral video of a man who organised a music band outside the premises of one of its branches in Anambra State for being wrongfully debited by the bank.

In a statement on Tuesday made available to IvoryNG the lender denied the allegations of the man stressing that the video “was a picketing exercise organized by the Amalgamated Union of Public Corporations, Civil Service Technical and Recreational Employees over a dispute they have with the Anambra State Urban Water Holding Corporation and Anambra State Waste Management.”

the bank, it had earlier clarified in a starement that while the union obtained a garnishee order against the accounts of Anambra State government in Fidelity Bank, it was unable to honour it as the judgment debtors, Anambra State Urban Water Holding Corporation and Anambra State Waste Management Authority, had filed a notice of appeal as well as a motion for stay of execution of the order of court on the day the garnishee order was granted.

“The union is aware of these processes as they were served on them. The motion for Stay of Execution is still pending and had not yet been heard and determined when the union took into its hands to attack Fidelity Bank.

“We are a law-abiding corporate citizen guided by the rule of law.

“Parties that have submitted their processes to the court should follow the due process of the law to enforce their rights and not take the law into their hands.

“Fidelity Bank has no industrial dispute with the union as to warrant the picketing of any of our branches.

“The attack on our bank by the union is an irresponsible use of brute force by the union on a law-abiding corporate citizen.

“We remain committed to the due process of the law, and we wish to assure all our customers of our unwavering commitment to providing them with superior service delivery,” it concluded. 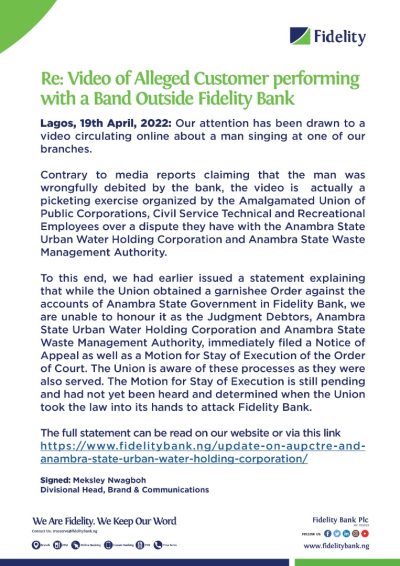