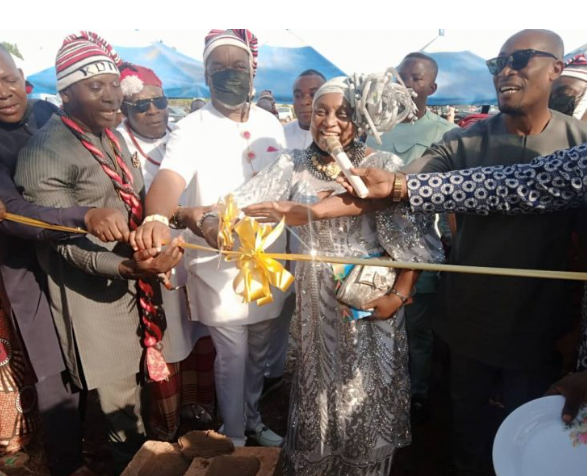 FG flags off the building of cinematography centre in Abia

The federal government has commenced the building of a cinematography centre in Asaga-Ohafia local government area of Abia State. Lauding this feat

The federal government has commenced the building of a cinematography centre in Asaga-Ohafia local government area of Abia State.

Lauding this feat, the national president, Women in Nollywood Development, Chinyere Nwabueze described it as a welcome development.

The actress who spoke at the foundation laying ceremony of the centre said the importance of the centre cannot be overemphasized.

Popularly known as Lady Tinted 1, the film producer with over 21 years experience in the industry, commended the Nigeria Film Corporation for the concept of the centre.

“The centre will provide good opportunity for youths in the state in particular and the South East in general who want to build a career in cinematography access to proper training without travelling far for it,” she said.

They will, during their training,  be exposed to better and more digitalised and modern equipment including handling of updated cameras among others,” noted Nwabueze, who has appeared in over 300 films.

She further said she believes that “in a few years to come, we will begin to have better picture and sound quality especially in our Asaba films and others that will be shot in the South East.”

In his remarks earlier, the managing director of the corporation, Dr Chidia Maduekwe assured that the federal government has made adequate provisions for the project in both 2021 and 2022 budgets.

According to him, “The centre is indispensable in the holistic turn around of film production activities from the eastern part of the country, with rich cultural and tourism heritages.

“It will serve as the hub for providing training for youths and other digital savvy and innovative Nigerans in audio-visual training, production, and post-production techniques,” he further said.

Performing the ceremony, Senate chief whip, and representive of Abia North Senatorial District, Dr. Orji Uzor Kalu, described the initiative as laudable and capable of building the capacity of the industry.

Represented by the executive secretary, Orji Uzor Kalu Foudation, the Rev. Jemima Kalu, the onetime governor of the state said the centre has added to the landmark projects of the government in the South-East.