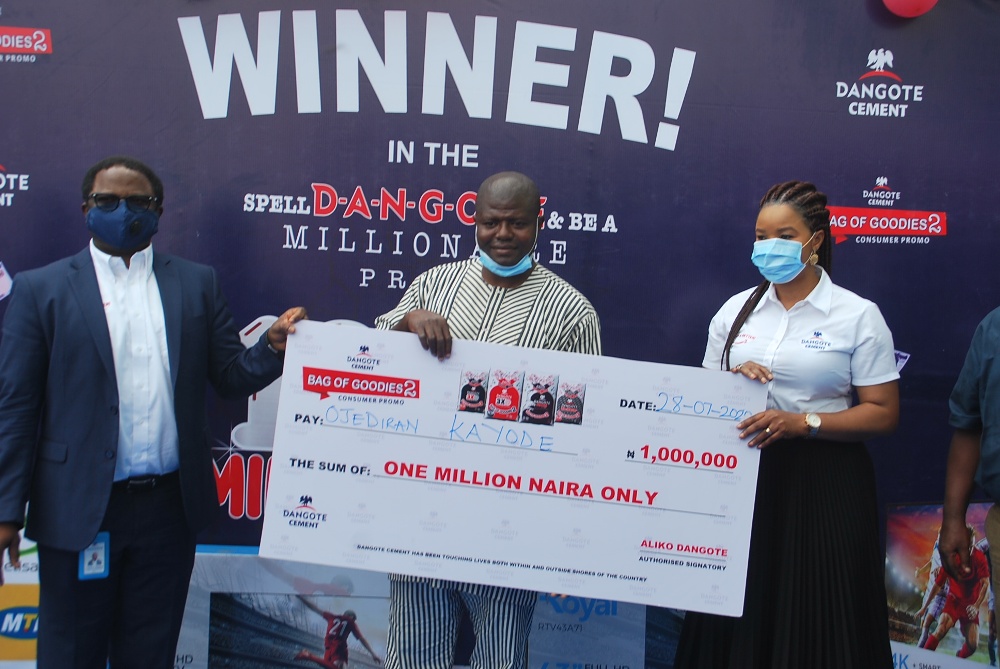 Excitement in the air as winners emerge in Dangote Cement promo

The on-going Dangote ‘Bag of Goodies Season 2 Consumer Promo’ has triggered excitement in the country as more winners continue to emerge, winning mill

The on-going Dangote ‘Bag of Goodies Season 2 Consumer Promo’ has triggered excitement in the country as more winners continue to emerge, winning millions of Naira, goodies bags, recharge cards, and several others mouthwatering prizes. Just last week, the company sent credit alerts of One Million Naira each to the first three winners to emerge from the Dangote Cement Promo in a ceremony witnessed by Nigerian media and few family members of the winners. This is in fulfillment of the company’s promise to make one thousand people millionaires, in its on-going “Bag of Goodies: Spell Dangote and win a Million Naira Consumer Promo, which commenced a few weeks ago.

Already, many other lucky winners are carting away, recharge cards and Dangote Cement Goodies Packs, which contain rice, salt, pasta, sugar, seasoning in the ongoing promo, which the company said, was initiated to alleviate the negative impacts of the deadly COVID-19 on consumers of Dangote Cement. A bricklayer in Lagos, Mr. Adekunle Donald, said he is very excited about the promo and that he is expecting to win at least One Million Naira before the end of the promo.

“Right now, I am very close to winning One Million Naira. I have some of the letters with me already, just waiting to get two more letters to complete the word “D-A-N-G-O-T-E” and become a millionaire,” he said.

Adekunle disclosed that he has lost count of the numbers of recharge cards that he has seen so far inside Dangote Cement bags since the promo started.
“I work in a block molding company and we use Dangote Cement on a daily basis. Right now, it is difficult to remember the number of recharge cards that myself and other workers have collected from the promo bags. We are all excited because I know that before the end of the promo period, I will not only win recharge cards, I will also become a millionaire.”

Marketing Director, Dangote Cement Plc, Mrs. Funmi Sanni, encouraged consumers to continue to buy Dangote Cement and continue to win several numbers of prizes that have been available by the company. Sanni insisted that consumers are entitled to multiple times winning in the ongoing promo.

“The beautiful thing about the promo is that the new Dangote Cement millionaires can win again and win. There is no limit to the number of times they are expected to win. So my advice is that they should keep on buying Dangote Cement and keep on winning,” she said.

Aside from winning One Million Naira, Sanni said that consumers also stand a chance to win tricycles, motorcycles, television sets, refrigerators, Dangote Food Goodies packs, recharge cards and many other exciting gifts. She explained that the promo was meant to reward its teeming customers who had with their patronage made Dangote cement the number one product in the country. She stated that there was no better way to show appreciation to them than the cash reward in view of the present situation.

To be a part of the promotion, she explained,
“All the consumer needs to do is to buy any promo bag of Dangote Cement during the promo period, pick out the scratch card inserted in the bag, scratch open the inserted card to see what you have won, and go to the nearest redemption center to collect your prize.”

Under the new promo, 1,000 Nigerians are expected to win a star prize of N1 million each over a period of 16 weeks. 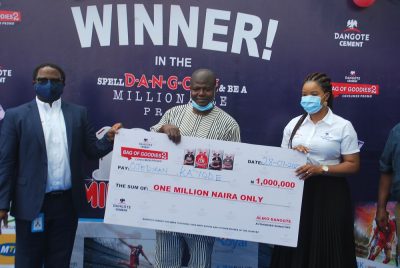