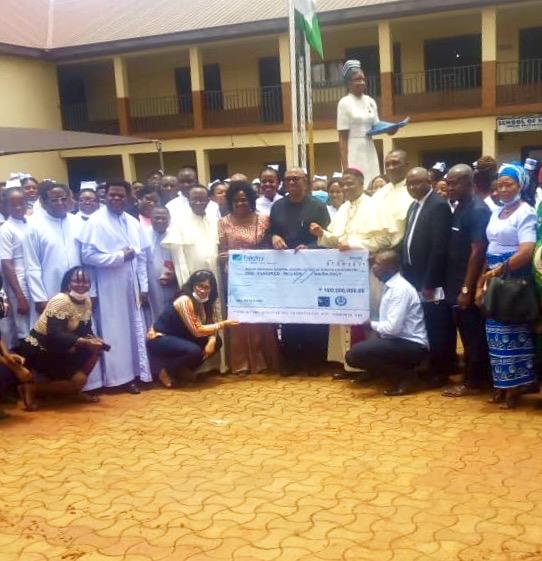 Former governor of Anambra, Peter Obi on Tuesday, 7 September, donated N100m to Bishop Shanahan Specialist Hospital Nsukka (BSSHN) for the development of its School of Nursing, Midwifery, and Health Technology.

BSSHN is a missionary hospital owned and managed by Nsukka Catholic Diocese. The money is to be disbursed over the next three years, Abeya News reports.

Obi was accompanied on his visit by his former Chief of Staff and Commissioner for Budgeting and Economic Planning, Prof Stella Chinyere Okunna, and former Commissioner for Housing and Urban Development, Anambra State, Dr. Patrick Nky Obi.

Presenting the cheque to the proprietor of the hospital and Catholic Bishop of Nsukka Diocese, Bishop Professor Godfrey Igwebuike Onah, at the hospital premises, Obi stated the urgent need for more investment in Nigeria’s health sector, especially at the primary level, saying that nurses and midwives play very critical roles in healthcare delivery.

“We cannot talk about health, especially primary healthcare, which is the most critical, without talking about the contribution of nurses and midwives.

“Nurses and midwives account for over 50% of the global health workforce. They play a very vital role in health promotion, disease prevention, delivery of primary and community care. They are key to the achievement of universal health coverage,” the former governor said.

Decrying the shortage of nurses and midwives, not only in Nigeria but also globally, Obi, who noted that by 2030, more than 10 million nurses would be needed in the global health sector, said the situation called for steps towards setting up and equipping colleges of nursing sciences and schools of midwifery to train health professionals who will fill in the gap.

In his remarks, Most Rev Godfrey Onah, while welcoming Obi and appreciating his kind gesture, described him as a lover of humanity.

Recalling how Obi had remained supportive of the hospital, even when he was the governor of Anambra State, Bishop Onah described Obi as a man who loves to identify with and help those in need, pointing out that Obi is one man he knows who has practical ideas that can change Nigeria for the better.

He urged Obi to hold on to his integrity which, he said, stands him apart.

“There are many politicians who are as intelligent, smart, and influential as Peter Obi. However, Peter Obi’s integrity stands him out from them all. Throughout his years in the shark-infested waters of Nigerian politics, Obi has refused to be stained by the corruption that pervades the entire political system. His commitment to human development remains exemplary”, Bishop Onah said.

Speaking also, Rev. Fr. Mellitus Ossai, Chairman Diocesan Hospitals’ Management Board thanked Obi for the donation which he said would move the school of nursing and midwifery to the next level.

Ossia assured the former governor that the money donated would be channeled for the purpose it was meant.

“I assure you that the money will be used for the purpose of upgrading the school of nursing and midwifery to college status. Silver and gold we have none to give you back but we will continue to remember you in our prayers,” he said.