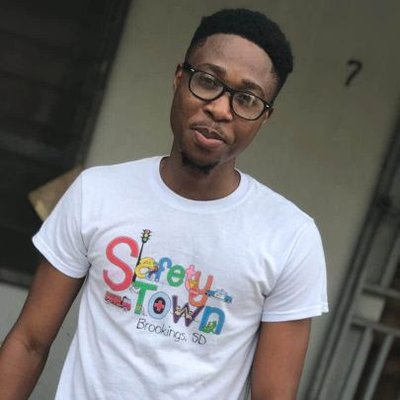 Victor Israel, one of the doctors, who provided medical assistance to youths protesting against police brutality and bad governance in Port Harcourt,

You negotiate with terrorists, dialogue with #EndSARS protesters – Falana to FG
#EndSars: Genevieve Nnaji pens open letter to Buhari
How concerts were organised to distract youths from #EndSARS summit

Victor Israel, one of the doctors, who provided medical assistance to youths protesting against police brutality and bad governance in Port Harcourt, has appealed for help.

Israel, on his Twitter handle @VictorIsrael_, lamented that his account had been frozen by the Central Bank of Nigeria.

According to him, his account was frozen for providing medical assistance to #EndSARS protesters.

In one of his tweets, he expressed willingness to collect as little as a cup of rice.

In a series of tweets, the pharmacists shared pictures of his activities during the #EndSARS protests in Port Harcourt. One of the pictures showed him treating an injured protester.

He tweeted, “Exactly two months and nine days after CBN froze all my bank accounts because I gave medical assistance to #EndSARS protesters in Port Harcourt. All my sweat, all my savings gone! This is so far the worst Christmas for me and my family. Omo! Abeg, who get rice to give me?”

“CBN froze all my bank accounts for two months now because I received donations for #EndSARS protest in Port Harcourt. They said I’m sponsoring terrorism, please do I look like a terrorist? I’m a Pharmacist whose offence was to give medical assistance. I need help.

“My offence was providing medical assistance to protesters who said no to police brutality. The government through the CBN froze all my bank accounts for over two months now, left me stranded and hiding like a fugitive in my own country. Kindly retweet! We need help,” he said in another tweet.

The #ENDSARS protests had lasted between October 7th and 20th in Lagos and several other states of the federation. While the protests lasted, relations, friends, and associates of missing persons claimed their relations had either been killed or held incommunicado by security agents.

Of particular concern was the Lekki toll gate shooting of Tuesday, October 20, where peaceful #ENDSARS protesters were shot at by security agents, leading to a yet-to-be ascertained number of casualties.

The shooting incident had attracted national and international outcry, with the Lagos State and Federal governments being urged to unravel the identity of the shooters and who deployed them.