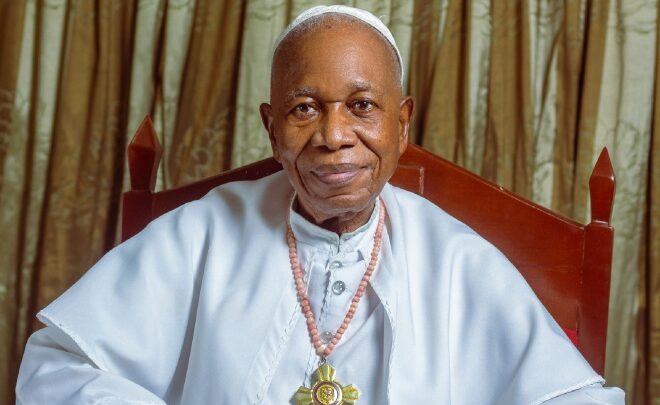 ‘Does he have a brain?’ Sunday Mbang asks, questions Buhari’s capacity to rule

Sunday Mbang, Prelate Emeritus of the Methodist Church Nigeria and former President of the Christian Association of Nigeria, passed a blistering verdi

Sunday Mbang, Prelate Emeritus of the Methodist Church Nigeria and former President of the Christian Association of Nigeria, passed a blistering verdict on President Muhammadu Buhari, casting aspersions on his intellectual ability to rule Nigeria.

Buhari, during his tenure as a military dictator, was seen by many as a figurehead, while his deputy, Gen. Tunde Idiagbon, was considered the brainpower of his brutal regime.

On Sunday, Mbang re-echoed the sentiment.

“You know there is always the argument that he (Muhammadu Buhari) is not the one ruling. They have not solved that problem. The first problem was whether he had the certificate or not. That one came and went; we don’t know the beginning or the end of it. So, these are the areas that you have to find out. Does he have the certificate or the capability to rule? That one we don’t know.

“If he does not have the certificate, how will he have the capability of being an administrator because administration involves a lot of things? Then they say he is not the one ruling. Have we solved that problem? I hear it, and Nigerians always hear it. I know that when Buhari was head of state, it was the late Gen. Tunde Idiagbon that was ruling the country.

“We, Christians, never successfully had a meeting with him (Buhari). We would book a meeting, and he would send Major General Magodo to come and meet with us. One day, I asked Magodo, ‘What is going on? Is the man afraid of us?’ the cleric said in an interview with Punch.

He then listed names of previous heads of state whom he believed had a “brain” to rule the country. When he got to Mr. Buhari, he expressed his reservations.

Mbang explained further, “When I sat with the late Gen. Sani Abacha, I knew Abacha had the brain. It was his rascality and the evil around him that caused his problems. But does this man (Mr. Buhari) have the brain to run this country? You know his wife said other people are running the country. I am not the one who said it o! The wife said it. And it happened that, all of a sudden, the wife ran to London and when they were talking of marrying another wife, she ran back.

“These are the stories I hear. I don’t know whether they are true or not. When I sit with Obasanjo, I know he has the brain. Ibrahim Babangida has the brain, but his own was how he used it. I was also very close to Abdulsalami Abubakar. He too has the brain, then he has a wife who is a judge. So when we have such people as leaders, you will understand what they should do. But here, we have a leader whom his wife does not understand.”

“People have said Nigeria is a failed state, but I don’t know to what extent Nigeria has failed. However, when you see the things happening in the country, you begin to wonder whether we still have anything called security forces. I mean, there is no day that I don’t hear about somebody being killed almost every day,” he pointed out.

However, Mr. Mbang did not hesitate to blame Nigerians for the problems in the country. According to him, corrupt people have been allowed to run amok in the corridors of power.

“I have lived in this country during the colonial days; I was involved in independence. The country started to do well, but we have very dangerous politicians who have taken us many years back. A lot of them are corrupt. When we look at the government, most of those corrupt politicians are in the ruling party. We embrace them and offer them the best areas, so how can corruption stop?”