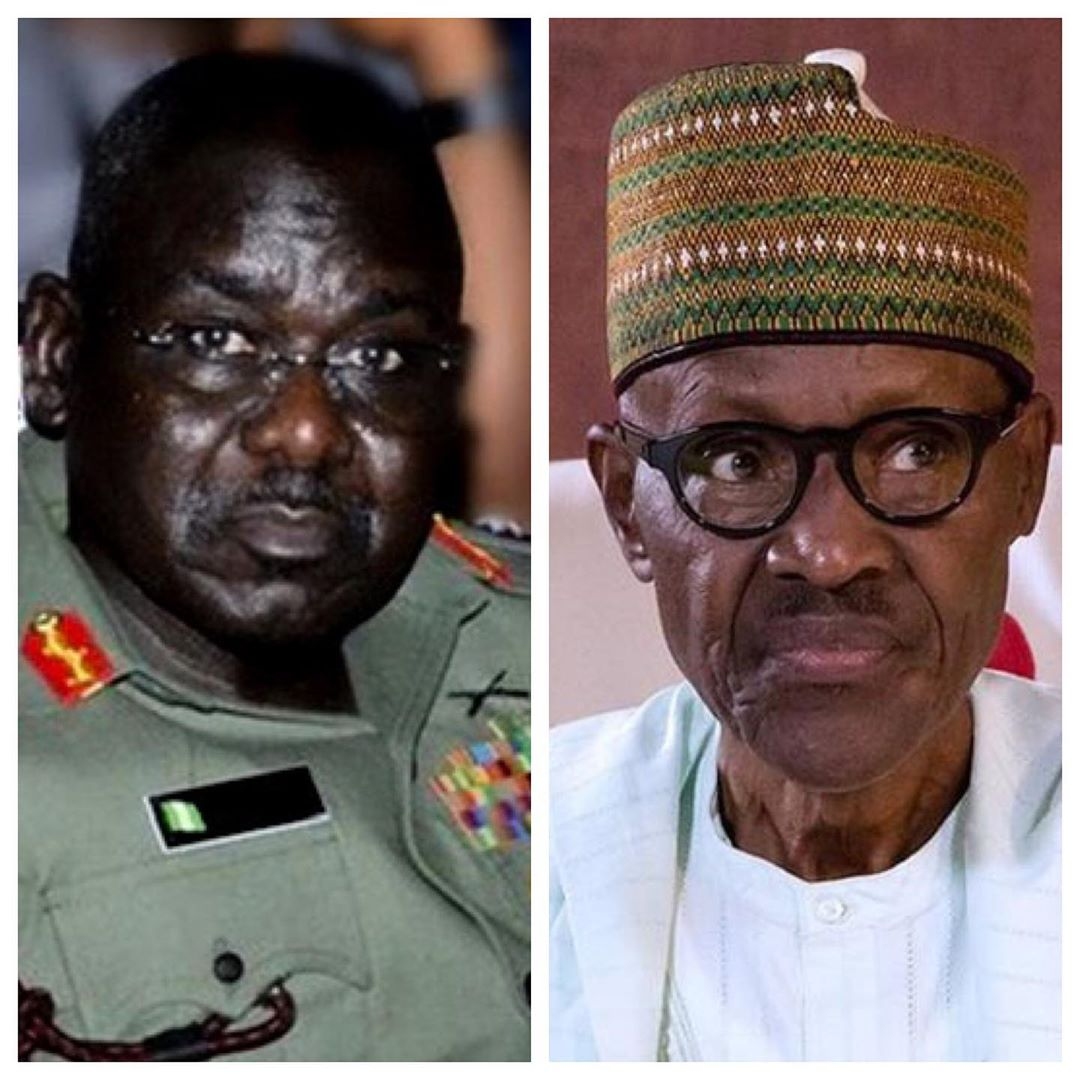 Buhari, Buratai are hiding behind one finger

On social media and my YouTube channel (Reno’s MasterClass), I have proved beyond all reasonable doubt that the Lekki Massacre of peaceful, unarme

On social media and my YouTube channel (Reno’s MasterClass), I have proved beyond all reasonable doubt that the Lekki Massacre of peaceful, unarmed #EndSARS protesters happened. It is a real historical incident that occurred on Tuesday, October 20, 2020. The military arrived at exactly 6:40PM. The shooting began two minutes later, at 6:42PM. The first casualty was recorded at exactly 6:50PM.

I did not speak about this or release the videos in my possession because I was waiting for the victims to get into a safe house provided by a friend whose identity I will not reveal. However, what I will reveal is that the survivors told me that before they got into the safe house, they had received calls from the government offering them N5,000,000 (five million Naira) if they would walk away and forget the incident. How they got their numbers, they don’t know. What they have done is get rid of their SIM card and keep their phones, with records of the calls.

I have released videos, with metadata and geolocation, proving that they were shot at the Lekki Toll Gate, on the date and time of the Lekki Massacre. On one of the videos, you can see the flashes of the gunshots and hear the ricochet. The report of the bang and the bloodstained clothes and flags are evident.
On another video I exclusively released, and which was shot early the next morning, you can see a young man who returned to the scene to retrieve the body of his friend who was shot the previous night. The body was not there. It was missing. Most likely taken away by the military.

However, there were telltale signs. There was the still, moist pool of blood right in front of the toll gates (remember that Governor Sanwo-olu said there were no bloodstains at the toll gate?). That video was shot just before some officials of the state cleaned up the scene, thereby contaminating the crime scene. But my video preserved the evidence. And we have metadata and geolocation proving the date, place and time the video was shot.

I also released another gruesome video, which was of a handsome, and affluent-looking young man that was shot at the Lekki Massacre. He was rushed by Good Samaritans to a hospital, whose identity I will not mention. He eventually died at the hospital. His identity is not known, and I have asked members of the public to see if they could identify him. He had on a gold chain and other expensive jewellery.

I still have several even more damning videos yet to be released. The long and short of it is that both the federal and state government lied. The Lagos state government was only forced to admit the deaths of two persons (much more than two persons died) because we sent the aerial drone footage to CNN and he was confronted with it. In the face of such overwhelming evidence of men in military uniforms (camouflages) carrying guns and the sounds of gunshot rending the air, Governor Sanwo-olu could not very well deny oblivious facts. He stammeringly admitted part of the truth.

And there is the statement by Lieutenant General Turkur Buratai, President Buhari’s Chief of Army Staff. Buratai is obviously a low mentality korofo that only got to where he is due to quota system and his ethnicity. He cannot think strategically. That is why he says he does not care if he is placed on a visa ban. When was the last time he went for his medical check-up in Nigeria? Does he have properties in Dubai? Buratai is afraid, and his words betray his fear. He is bluffing. Buratai knows who gave the orders to the soldiers who massacred peaceful, unarmed EndSARS protesters because there is a chain of command. From Buhari, to him, to the battalion command.

They did it in Zaria, on December 12, 2015, when Buratai murdered 347 unarmed Shiite men, women, children and infants, and got away with it. I was one of the few Southern Christian voices to raise the alarm in 2015. I said, if we do not speak up when Buratai killed Shiites, we will lose our moral authority to speak when he kills us. I called the then President of the Christian Association of Nigeria, Pastor Ayo Oritsejafor, and convinced him to issue a statement. That I spoke up for Shiites and organised the Christian community to come to their defence, gives me the moral authority to speak up now.

This is the last straw. The international community must punish the Buhari administration. When Buhari was between life and death in London, many Nigerians, myself inclusive, and perhaps some of the Lekki Massacre victims, prayed for his survival. And God heard our prayers, only for the same Buhari to use the bullets we paid for with our tax Naira, to kill us. The world must show him that they care more about Nigerian lives than they do about Nigerian oil. Buhari’s government is cash-strapped. The international community must refuse to lend his government any money until those behind the Lekki Massacre are brought to book.

Nobody should sell weapons to the Buhari government. They have shown that they are not responsible. They will turn their weapons on the very people they are meant to serve. Actions must have consequences and the consequences for wilful taking of the lives of unarmed civilians, must be wilful refusal, by the West and China (I have no hope on China, I am just fulfilling all righteousness) to sell weapons to this irresponsible government.

I am about to change the mood of this piece. An abrupt change in subject. We must discuss the big elephant in the room. And that is whether Nigeria’s unity is still viable. In a marriage, when couples are having marital challenges, they go for marriage counselling and get expert counsel on how to save their marriage by making changes.

Nigeria is not an organic country. It is a country cobbled together by the British, via force of arms. Let us face the truth, this country was put together as a marriage of convenience to suit British imperial interests.
Now, the British are gone, and for sixty years we have been trying to build unity. Progress and retrogress have been made, but in the last five years of Muhammadu Buhari, the differences have been so pronounced due to the president’s obvious nepotism and tribalism, to the extent that it is almost impossible to be loyal to Nigeria under Buhari.

Never have we had such a sectional and divisive leader. How can we have a united country with a divided government? The three arms of government, namely, the Executive, Legislature and Judiciary are headed by Northern Muslim males, begging the question of whether Nigeria is a Muslim Brotherhood. If the situation were reversed, and Southern Christians headed all three arms of government, would the North accept it?

Not only are the three arms of government headed by Northern Muslim males, the Chief of Staff to the President, the Ministry of defence, Army, Airforce, Police, DMI, NIA, DSS, EFCC, NIS, NCS, NPS and 90% of our military and security services are all headed by Northern Muslim males. Where is the balance, where is the justice, where is the fairness? It is this imbalance that made the Lekki Massacre possible. If there was balance, it would not have happened. And if this imbalance continues to happen, then Nigeria must begin to rethink its existence.

It is this same imbalance that has made our armed forces look big for nothing because they are run by unprofessional officers, like Turkur Buratai, who only rode up the rank due to his connections, rather than his qualifications.
I mean, look at what our security forces have been reduced to. Being used for house to house searches in the search for looted #COVID19 palliatives.

When Boko Haram attacks our army bases and loot arms, our soldiers run away and hide in bushes. But when hungry Nigerians loot palliatives (that were supposed to have been given to them ages ago), the army and police allow themselves to be used to conduct house to house searches. Let them go and search Boko Haram’s hideouts!

Reno Omokri is an author and lawyer and host of Transformation with Reno Omokri, a Christian teaching TV show broadcast on San Francisco’s KTLN and Detroit’s Impact Network. He is also the founder of a multimedia project, Build Up Nigeria, and has produced a series of short films in the U.S.