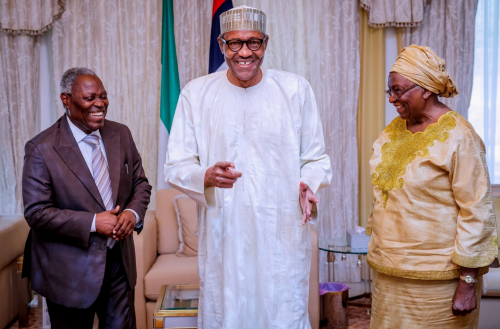 Earlier in the week, President Muhammadu Buhari hosted Pastor William Kumuyi, the General Overseer of Deeper Life Bible Church alongside his wife, Esther and other pastors of the church, Chike Onmuasoanye and Samuel Afuwape, at the State House in Abuja. Unlike a number of people who didn’t take kindly to seeing the clergy visit the president, especially with the growing apathy in the nation and more importantly, the issue of Leah Sharibu who is yet to be rescued from the clutches of Boko Haram since she was abducted from her school, former aviation minister and lawyer, Femi Fani-Kayode has verbly expressed his sadness about the clergyman’s visit to Buhari.

Fani-Kayode, in an article posted on his website, femifanikayode.org, expressed sympathy that “so much innocent blood has flowed under Buhari yet Pastor Kumuyi is still comfortable with smiling and shaking hands with him and neither has he said one word publicly about Leah Sharibu”.

The article reads in part: “I see the much-loved and highly respected Pastor William Folorunso Kumuyi of Deeper Life (one of the greatest Churches on the African continent and a pioneer Church within the Pentecostal denomination in Nigeria) and his wife felicitating with a man under whose watch more innocent and defenceless Nigerians, and particularly Christians, have been slaughtered than any other in the history of our country.

“I and many others are saddened by this. This is all the more so because I happen to love Pastor Kumuyi and the Deeper Life Church. I always have and I always will. Yet sadly I also feel a deep sense of shame and outrage about this outing. This is especially so when it has been reported by the media that he told the President that under his leadership “Nigeria is safe.

“For how long must a few of our clerics embarrass the Body of Christ and Christendom by bowing before our oppressors and encouraging them to continuously torment, afflict and terrorise our people. Pastor Kumuyi’s photo shoot with Buhari reminds me of the famous picture of Pope Pius X11 shaking hands with and commending Adolf Hitler during the course of World War 11. The Catholic Church never lived it down and was compelled to tender a public apology for this grave error almost 50 years later.

“Let us hope that one day every man and woman of God, whether he or she be a Pastor, Bishop, General Overseer or Archbishop, that has in any way supported, encouraged, applauded or colluded with the evil tyrant that has afflicted, scourged and plagued our land and our people over the last 3 years and six months will find the decency and courage to apologise for it”.