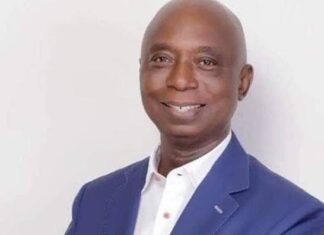 Just in: Nwoko petitions IGP, denies having business dealings with Ayeni and Okunbo

Businessman and politician, Prince Ned Nwoko, has rubbished Tunde Ayeni’s claim that he (Nwoko) received the sum of $6,000,000 (Six Million Dollars) from him and Captain Idahosa Okunbo, in a business deal with Ocean Marine Solutions (OMS) Limited, over which he allegedly promised to pay the company the sum of $30,000,000 (Thirty Million Dollars).

In a letter addressed to the Inspector General of Police, Mohammed Adamu, Nwoko put a lie to Ayeni’s claim, stating that at no point in time “have I had any dealings with Ayeni or Ocean Marine Solutions in whatever capacity.”

Ayeni had, through his lawyer, Femi Falana, petitioned the Economic and Financial Crimes Commission, to investigate Captain Hosa, citing various financial infractions. According to Femi Falana, the EFCC investigation has become necessary in order to facilitate “the recovery of the legitimate shares and earnings which our client (Ayeni) is entitled to.”

In the said petition, Falana stated among others, that Nwoko had approached OMS Limited, requesting it to fund the process for the Paris Club refunds to the Local Governments of Nigeria, and also that he (Nwoko) had charged 20% of the refund as his fee, and that upon success he would pay OMS the sum of $30,000,000 as return for the funding.

Describing Ayeni’s assertion as “a malicious statement devoid of truth”, Nwoko expressly stated he has “never received any sum from Ayeni which he purported in his petition and has never played any role whatsoever as it relates to this transaction.”

“All transactions on the subject matter were done directly with Capt. (Dr.) Idahosa Wells Okunbo in his personal capacity to the exclusion of any other party including Ocean Marine Solutions Limited. To suggest otherwise as contained in the said petition is merely a malicious statement devoid of truth.”

Nwoko urged the IGP to yield no credence to the contents of Ayeni’s petition, as he had no clue “as to the nature or extent of my involvement with ALGON,” as he further clarified that that he only met Tunde Ayeni “in connection with ALGONS contract for the supply of Ambulances which were to be funded from the Paris Club refunds (5% of the judgement sum) and this project is still pending for all that I know.”

“I am not aware of any payments in connection with this project,” Nwoko stated.