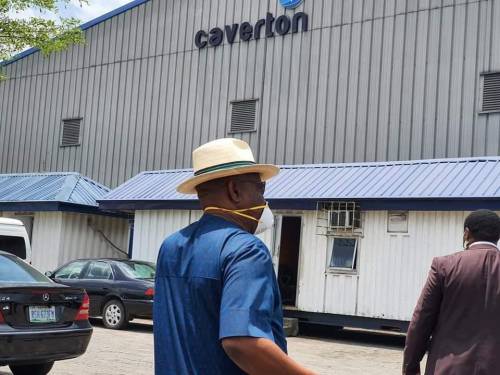 Following Federal Government’s outburst over Rivers State governor, Nyesom Wike’s decision to arrest and charge two pilots of Caverton Helicopters including 10 of its passengers, the Rivers State government has now declared Caverton Helicopters, Persona Non Grata in the state for what it describes as endangering the lives of Rivers people by its suspicious operations despite the ban on movement in the state.

In a State Broadcast on Wednesday, Rivers State Governor, Nyesom Ezenwo Wike directed Local Government Council Chairmen to close the Offices of Caverton Helicopters across the state. He said: “We appreciate the need to protect business interests and operations in the State and we will do whatever that is required to ensure that no business is unduly affected by the measures we have taken to combat the Coronavirus.

“However, we shall not welcome businesses or companies that value their business activities or profit more than or in clear disregard of the lives and health of our people. By its actions Caverton Helicopters have clearly shown that Rivers lives do not matter to it. It is an enemy of Rivers people and is hereby declared persona non grata in Rivers State. With this declaration Caverton Helicopters can only chose to operate in any part of Rivers State at its own risk as Local Government Chairmen have been directed to close their offices and prevent their operations.”

The Federal Government had earlier bashed Wike for arresting two Caverton Helicopters’ pilots and the passengers for flying into the State during Coronavirus lockdown. The Management of Caverton had written to the Federal Government to rescue its pilots from Wike who arrested and prosecuted them in court for doing a legal duty.

However, Minister of Aviation, Hadi Sirika, on Wednesday, said the Federal Government duly granted Caverton Helicopters the right to fly into Rivers. He said the Police Commissioner and the Commander of the Air Force Base in Port Harcourt would have to answer for alleged incompetence and for going with Wike to arrest the pilots.

According to him, Civil Aviation is on exclusive list and that it was only the Federal Government that had the power to legislate on aviation matters. He said the police and air force chiefs who went with Wike to effect the arrest were ignorant.

But Wike said that the highly insensitive and provocative actions of Caverton Helicopters took place in the midst of credible intelligence reports about plans by enemies of the state to traffic carriers of the dreaded Coronavirus into the State.

He said: “Their morbid intention is to create panic by pushing up the infection rate and rubbish the robust measures we have since put in place to cut off the spread of the virus and keep our State and our citizens safe and secure from the ravaging pandemic. As expected, and required by our laws, the crew and the passengers on board that ill-fated helicopter were promptly arrested by the law enforcement personnel and are being prosecuted before our courts in line with our COVID 19 Declarations and Containment Orders.

“Caverton Helicopters claimed to have gotten permits from some federal agencies to fly passengers into the State, which never bordered to take the State Government into confidence in issuing such permits in violation of our laws and containment orders. While federal agencies reserve the right to issue flight permits to airline operators to fly into Rivers State, we insist that the State Government must equally be informed and taken into confidence in the process.

“This the only way to avoid suspicion, conflicts of interests and unnecessary bickering between the State and Federal Governments in our collective efforts to combat the spread of COVID 19 in the country. Let me reiterate that for us, COVID 19 in Rivers State is a matter of life and death, and we will never succumb to any blackmail from any person, institution or authority in our determination to protect our citizens and our State from the spread of this deadly virus.

“At this time and under the present situation, nothing; I repeat; nothing, is more important to us than to safeguard the lives and well-being of our citizens no matter the cost, and we shall spare no efforts to achieve this singular most fundamental objective of our Government. We have sworn to protect the lives and advance the well-being our people, and nothing can stop us from taking all necessary steps to prevent or stop any person, action or activities that would endanger the lives of our citizens,” he said.