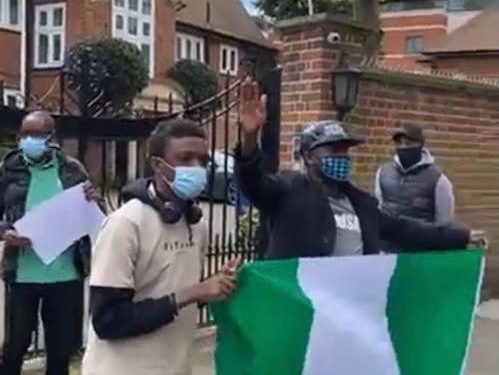 Why I Initiated protest against Buhari in London – Reno Omokri

Buhari is currently in London seeking medical care. he left the country on March 30th 2021 amidst protests from a cross section of Nigerians who felt that he should have developed the health care sector like he promised while he was campaigning to be president, instead of becoming a medical tourist.

Buhari’s medical trip came on the heels of a strike action embarked upon by National Association of Resident Doctors, NARD, over the inability of the federal government to pay them their due allowances.

I flew into London on April 2, 2021 to lead the #HarassBuhariOutOfLondon protest, and I went there straight from the airport. I did not eat, sleep, shower or rest. The President’s people called the City of London Police on me, and I was questioned.

At the end of the questioning, which was streamed live to my followers, they announced with their mouths that I had committed no crime and that my protest was peaceful, orderly and within my rights.

In fact, after General Buhari’s people called the police on me that afternoon, I calmly asked the officer questioning me this question:

Officer, has Her Majesty, Queen Elizabeth II, ever come to Nigeria to access healthcare? So, why should you be called on me when I am asking my President to return to Nigeria to use our hospitals?

The police officer was touched. He told me I was within my rights and flashed the thumbs up sign, and allowed the #HarassBuhariOutOfLondon to continue. Buhari’s people failed big time!

So, why did I decide to initiate this protest at great personal expense and risk? It is because I believe that General Buhari is not running a government. He is running a criminal enterprise.

This man Buhari has been in office for five years. In that time, has budgeted over ₦10 billion Naira for the Aso Rock State House Clinic. This is the equivalent of $27 million. Is that not enough money to build a hospital and train doctors to treat him and other Nigerians? Yet, his wife, Aisha Buhari, admitted that that clinic cannot even provide ordinary paracetamol. Google it.

However, that was not my main reason for initiating the protest. I did it really as a way of seeking closure for the victims of the EndSARS protests, because General Buhari’s spin doctors are going around town misrepresenting the US State Department’s human rights report as a vindication that the Lekki Massacre did not happen.

That is not what the report states. Please read it yourself. The report states that the US was unable to independently verify what happened because the Nigerian authorities prevented anyone from obtaining the facts of the matter.

The report also said that while Amnesty International revealed that ten people died, the Federal Government said no one died, with the Lagos State Government saying only two people died and that that controversy makes it impossible to establish what really happened.

Finally, the report said that at least one corpse was found riddled with bullets and that they could confirm. They also said that another corpse was found with “blunt force trauma”. Nowhere in that report did the US State Department say that the massacre did not happen.

Now, I want my readers to think about this. When General Buhari’s son, Yusuf, was injured in an accident, we prayed for him to get well. I prayed for him. Other Nigerians likewise prayed for Yusuf’s survival. How did Buhari reward us? He sent soldiers to Lekki to kill peaceful, unarmed #EndSARS protesters. These are the children of the men and women who prayed for his son.

Now, after killing peaceful, unarmed EndSARS protesters asking for good governance, he is in London to secure his life and enjoy the benefits of good British governance. My conscience could not stomach it. I had to play my part in the effort to send the coward back home to fix the mess he created.

Only 5% of Nigerians are covered by a doctor. This man forced himself on Nigeria. He promised he would do better than his predecessors, but he has turned Nigeria into the world headquarters for extreme poverty. He has bequeathed us the highest unemployment in the world at 33%. We have the highest number of out of school children at 13.5 million. And having destroyed our economy, he has run to a London that is on COVID19 lockdown to restore his health.Too many people justify Buhari’s failings by pointing to the failures of past leaders, especially the exaggerated failures of his immediate predecessors.

In fact, when I asked Buhari to return home and use the run-down health facilities he has bequeathed to Nigerians, a young man named Yusuf Abubakar Al Sadiq, asked me rather rudely “Pls mention any standard hospital build by PDP 16yrs in office” (his exact words).

That same administration also built National Cancer Screening Centers nationwide, including at the Federal Medical Centre, Gusau in Zamfara, The University of Port-Harcourt Teaching Hospital and the National Obstetric Fistula Centre in Abakaliki.

In fact, after the upgrade of the University of Benin Teaching Hospital, it performed its first stem cell transplant surgery under Jonathan.

However, that is not the point. The Peoples Democratic Party government is gone for now. The All Progressives Congress administration is here. We must stop excusing the failings of the Buhari regime by blaming past administrations.

In case Nigerians have forgotten, the electorate voted for Buhari in 2015 because he said he could do better than the PDP.

I know many Northerners feel some camaraderie with General Buhari. However, they need to search the Quran and read what it says about supporting wrong based on primordial sentiments, like tribe and religion.

Northerners should not just blankety label anyone that is against Muhammadu Buhari as anti-North. Buhari is from the North, but he is not the North. The North is more than Buhari. As a matter of statistical fact, Buhari is not even good for the North.

In terms of human development, the North has fared far worse under Buhari than it did under any other leader bar none. Poverty was existent in the North before Buhari, but it is now extreme poverty. Something like 80% of the extremely poor people in Nigeria are based in the North.

And it is not just poverty. Unemployment is now at record level. Insecurity is now pervasive in the North. Northerners can hardly go to work, whether at farms, offices, or mills. Their children are not safe at school. Their wives are not protected from endemic insecurity even at the market.

No one can sleep with two eyes closed in Northern Nigeria.

With all these happenings, it makes sense to be anti-Buhari if you are pro-development. I was for President Umar Musa Yar’adua. Check my records. I supported him. I very strongly supported Alhaji Atiku Abubakar. Atiku is more Northern than Buhari, in that unlike Buhari, he speaks Fufulde.

The truth is that Muhammadu Buhari is only slightly more refined than his marauding herdsmen kinsmen. His cautionary statements about 5% and 97% prove it.