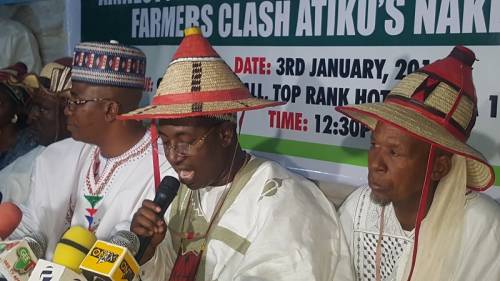 Herders under the Miyetti Allah Kauta Hore have said they will not recognize the Southern governors’ anti-grazing deadline, describing it as ‘sata

Herders under the Miyetti Allah Kauta Hore have said they will not recognize the Southern governors’ anti-grazing deadline, describing it as ‘satanic.’

The group said this just as the September 1 deadline set aside by Southern governors for the banning of open grazing draws near.

The herders said the planned policy had been overtaken by events, declaring the group’s support for the Nigerian government’s plan to revive grazing reserves, grazing routes and facilitate ranching in all the states.

The national secretary of the Miyetti Allah Kauta Hore, Saleh Alhassan, said members of the organization would not recognize any anti-open grazing policy in the country.

“We don’t recognize anti-grazing law. Nobody can do anti-grazing policy in Nigeria where we are constitutionally guaranteed the right of movement and occupation.

”I think that (open grazing) has been overtaken by events where the federal government is reviving the grazing reserves and grazing routes. Ranches are coming up across the states. Any policy that will heat up the polity, I don’t think is desirable for the country now.

”I think they are just beating a dead horse. After all, how many grazing reserves do we have in Southern Nigeria. Ninety percent of the cows we have in Southern Nigeria are meant for business. They are not there for grazing. The cattle are taken there for two or three weeks before they take them to the market. We don’t even understand what they mean by anti-open grazing,” Alhassan said.

Speaking further, Alhassan said: “That thing is Satanic. That kind of policy is Satanic. Anything of Satan cannot prevail over light. They will fail.”

Alhassan threatened the governors over their 2023 political plans of a power shift to the South, declaring they would not get their wish.

“The power that they are looking for, they will not get. We have reported them to almighty Allah to create confusion in the camp of the enemy. And confusion will be their lot. Where is Sunday Igboho? Where is Nnamdi Kanu today? They are all in jail. The God of the pastoralists is protecting them like the God of Elijah that speaks with fire; he has fired all of them.

“They can’t win. They are losers. It is a negative policy. We are supporting the federal government now to revive the grazing reserves, to revive the grazing routes, do ranches, settle the herders over time. Is that what they don’t want? Then they are the real bandits. If you are looking for a real bandit, it is Governor Samuel Ortom of Benue State. He is the real bandit. And he thinks he can fight the Fulani ethnic nationality. He does not know that we are not only in Nigeria. We are an African tribe.

”We are in charge of the United Nations. The pioneer secretary of the African Union is a Fulani herder. What is Ortom talking about? They better play politics that can unite this country. All these things they are saying, they can’t do anything as far as Nigeria is concerned.

”We are in our country, we are not going anywhere. We will not be intimidated by anybody and we are peace-loving. It’s their own cup of tea. After all, they are the consumers of the cows,” Alhassan said, adding that the plans of the governors had failed.

”Their plans have already failed. See Sunday Igboho there; he is languishing in Beninoise prison. See Nnamdi Kanu who was captured in Kenya. Forget about them. They are the ones sponsoring all these killings. It is the handiwork of Biafra. They want to set the country on fire.”

Alhassan went on to say that Governor Ortom will be arrested when he leaves office.

“These people know what they are doing. They are just there to steal money, especially Governor Ortom. He is there to steal the money of Benue State. And we are waiting for him. Immediately he leaves power, if the Economic and Financial Crimes Commission (EFCC) does not arrest him, our vigilantes will arrest him and hand him over to the Nigeria Police to be prosecuted like a common criminal. It’s just a matter of time. He will certainly join Dariye and Co. because he has eaten security votes in billions and he has masterminded the killing of innocent people in Benue State and has lied to the entire world,” Alhassan said.