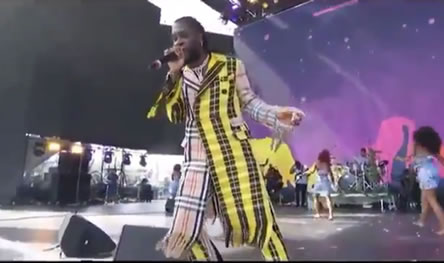 Vogue magazine recently featured afrobeat star, Burna Boy, courtesy of his latest visual masterpiece, the video for his latest single ‘Pull Up’, shot by director extraordinaire, Meji Alabi, and styled by his sister, Ronami Ogulu. Burna Boy  rocks a yellow leather jumpsuit before changing into a snazzy sequin buttoned-down and black leather pants. His signature black dreadlocks are swept back into a stylish do and he rocks out to what is certain to be another hit from the album.

Vogue starts off by acknowledging the commitment to fashion that Burna boy has made in recent years and admits that he has been a long-time fashion icon, even down to hosting a fashion dinner in New York.
“The Nigerian singer-songwriter whose swift rise to ubiquity in the music world has also made him a bona fide fashion plate. Not only can he pull off neon yellow zebra-print pants onstage, he’s also deeply committed to fashion in a broader sense, recently hosting a dinner in New York City where he donned a bright blue suit topped with his signature bucket hat; in this case a black nylon number from the recently relaunched Prada Linea Rossa line.”

Talking about Burna’s looks in the video, Vogue writes, “The summery clip, directed by Meji Alabi, finds Burna Boy donning two different garments cut from the same bright yellow cloth: the first, a jumpsuit that he wears with a pair of futuristic sunglasses; the second, a sequined button-down and black leather pants. Even though Burna Boy’s wardrobe is as kaleidoscopic and eye-catching as ever, the crew of model friends he rides around with throughout the video are also doing their best to steal the style spotlight.

“Aweng Chuol, Camille Munn, NyaLuak Leth, and Chanel Taylor each bring their own outstanding ’fits, from a bright red leather bucket hat and trench combination, to bold denim corsets, to asymmetric jumpsuits. Burna Boy’s style might be singular, but he clearly knows when to step back and let others shine, too.”