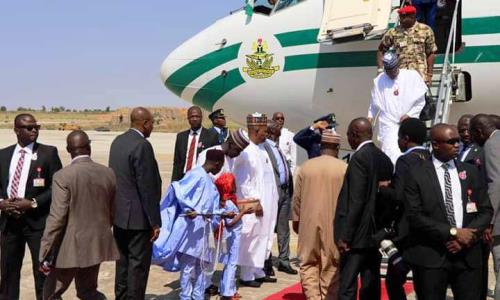 Some residents of Borno state booed President Muhammadu Buhari as his convoy made its way into Maiduguri on Wednesday. Buhari, who had been in Ethiopi

Some residents of Borno state booed President Muhammadu Buhari as his convoy made its way into Maiduguri on Wednesday. Buhari, who had been in Ethiopia since Friday for the African Union summit, headed straight to Borno to condole with the people over the latest Boko Haram attack.

On Sunday, 30 people were killed with several people abducted, including women in an attack at Auno, near Maiduguri.

Borno is a stronghold of the president. During his previous visits to the state, crowds lined up on the streets, chanting “Sai baba!” But as the convoy of the president made its way, some residents shouted in Hausa: “Bama so!” “Bamayi!”, which translates to “We don’t want; we’re not interested”, apparently referring to his visit.

Commenting on the hostile reception that Buhari got on Wednesday, a Twitter user wrote: “If what I’ve been hearing from the people welcoming President Buhari to Maiduguri is all but to judge, then the people of Borno are not happy. Just an opposite of his earlier Visits. “Bama so” “Bamayi!” This is really serious. There must be a change of strategy in Fighting BH.”

Na Democracy, everyone is entitle to his opinion. pic.twitter.com/rJchhoLspw