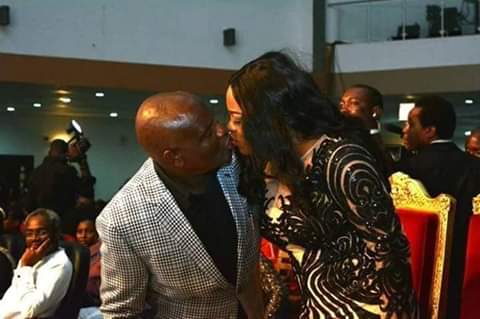 Valentine’s Day Special! Nyesom Wike, the most romantic Nigerian governor. See the multiple times he was photographed kissing his wife in public + their love story unveiled

Love is in the air no doubt, today being Valentine's Day and expectedly, there will be a lot of public display of affection going on. While there is n

From ordinary khaki, he now wears safari with diamond buttons, Wike continues to bomb Oshiomhole
Mind your utterances, fraudsters don’t talk in public, Wike tells Uzodinma
You are too garrulous – Uzodinma fires back at Wike

Love is in the air no doubt, today being Valentine’s Day and expectedly, there will be a lot of public display of affection going on. While there is nothing wrong with a little Public Display of Affection, PDA, especially among the youths in developed societies, it is considered a bit of a surprise when it happens on this side of the divide, particularly if the PDA is done by a couple from the older generation and when it is also, somewhat on a frequent basis.

Frequency or not, the Rivers State Governor, Nyesom Wike and his wife, Justice Suzzette Eberechi, have succeeded in rewriting the rules of PDA in Africa, particularly, Nigeria. Their public display of affection to each other is un paralleled in Nigeria’s political history. They are never shy to express their love for each other in public. That they are very much in love would not only be simply stating the obvious, it would be putting it mildly. So into each other are they that many have had cause to wonder if they aren’t a newly married couple. But alas, they have been together for all of 19 years and each year, their affection for each other keeps growing stronger.

A few years ago, Justice Eberechi took out time to pen this thoughtful note to her husband in honour of their 17th wedding anniversary and to celebrate his undying love for her. She said,
“It’s funny how life sometimes takes us where we never plan or expect to go. For three years, we sat in the same lecture rooms and halls but never passed a word between each other. It was only after I chanced upon his law note books in the possession of a mutual classmate that everything changed.

“At that time, the law books in our library were expired and, in most cases, not available and we had to find other means to report our Nigerian case law. Most of us resorted to copying from others who had lawyer friends they visited in chambers and while there, used their law reports/books. Thankfully, the situation is different today as not only has our Governor completed the long, abandoned building of the Faculty of Law, Rivers State University of Science and Technology, but he has also furnished it and equipped the law library with modern books, law reports and even e-resources.

“The current students there are lucky to benefit from this upgrade as theirs is now a standard Faculty of Law. It surprised me then, to realize that he was indeed a serious-minded student and not as I had earlier perceived. His notes were up to date as he took time to report more cases than were cited by our lecturers, which necessarily meant better grades if you can put them all down in your answer sheets during tests and examinations.

“I immediately coveted that notebook and pleaded with my classmate to loan me the book after she had finished, promising to return it in two days. She refused. Another request with the promise to return it in one day as I was prepared to sit up all night copying those cases, was declined. My last plea to photocopy the notebook and return it immediately fell on deaf ears. She told me to seek the permission of the owner, with the belief that I wouldn’t dare.

“And of course, she was right to think that as she knew that we had never once spoken to each other. At that point, I inquired from her, his name. She replied simply: “Wike”. I wondered how odd that name sounded as I’d never heard it before. I also wondered how to approach him as I believed that he disliked me as much as I did him. But the desire to have that fully loaded note book was too strong. I could not give up without at least, making an attempt.

“As he passed by us, I called his name as I had just learnt: “excuse me, Wike”. He froze and I noticed his shock and disbelief. I started putting my words together, expecting him to scowl at me, thinking in his head – “Oh! So you have decided to talk to me now that you need my notebook eh?’ He didn’t let me complete my request. He caught the drift so fast and he spoke to our mutual classmate, telling her to give me his note book after she had finished with it and he walked off. It was now my turn to be in shock!

“After I recovered, I started putting the heat on our classmate to give me the book asap. One borrowed book led to another and yet another borrowed book and soon after, we became friends. I got to see the hardworking, focused, studios and serious-minded person he was and still is. Before Iong, there was a marriage proposal. I declined as I didn’t see myself as the marrying kind but he wouldn’t give up. He said to me that the moment he first set his eyes on me when he joined us in our second year out of the more than five years I was in that institution, he knew already that I was going to be his wife.

“That got me even more confused. Having noted all the qualities I had noticed in him, I knew that he was a man with very great prospects or potentials for success, as I’d told him then. I therefore decided to accept his proposal and took a chance, believing that he would make me a happy woman. Today, the 19th of December, marks the 17th year we have been together as a married couple. He is a man that has exhibited excellent taste …. no wonder he chose and continues to choose me. He promised to give me the world at that time but he has given me much more than I could have ever asked for. Our three adorable children are a testimony to that fact and I can’t tell you enough, how fulfilled I feel.”

So in honour of Valentine’s Day, her are the multiple times governor Wike was photographed in public kissing his wife, Eberechi. 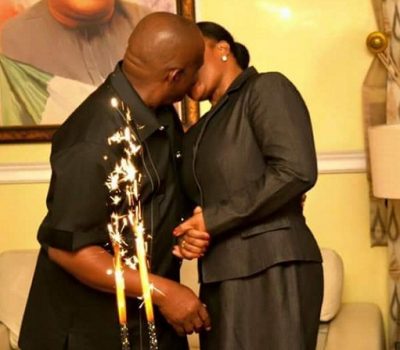 On her birthday, May 24th 2016, the governor shared a hot kiss with his wife,
Eberechi when she turned 44 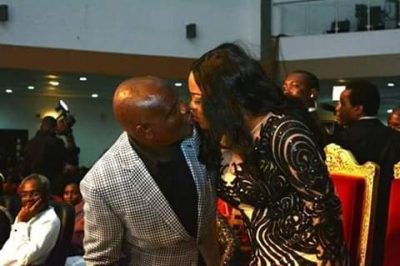 On June 11th 2016, the governor and his wife were photographed kissing at the Africa Movie Academy Awards (AMAA) which took place in his
domain, Rivers State. 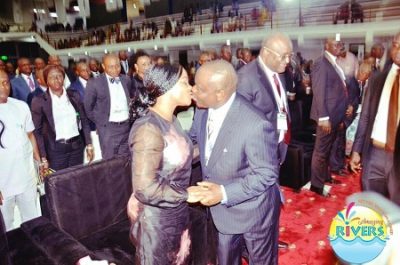 The governor and his first lady in a French kiss on August 23rd 2016 at opening ceremony of the 56th Annual General Conference of the Nigerian Bar Association. 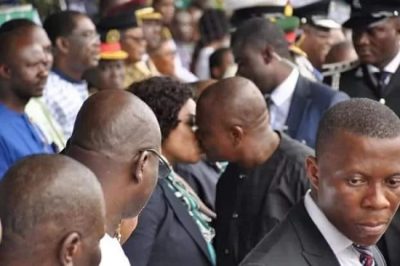 On October 1 2016, the couple were at each other at the 56th Independence Day celebration of Nigeria 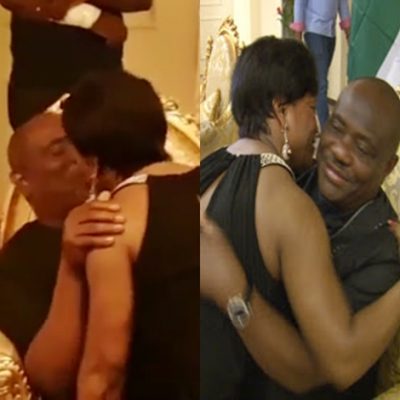 These two couldn’t get enough of each other when the first lady threw
her husband, the governor, a party to mark his 49th birthday at their
official residence on December 14th, 2016. 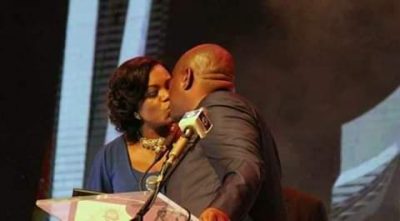 On January 25th 2019, at the International Federation of Women Lawyers
(IFWL) dinner which held at the government house Port Harcourt, the couple
couldn’t resist a kiss. 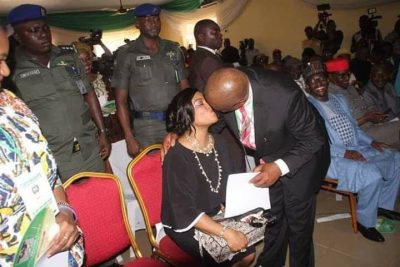 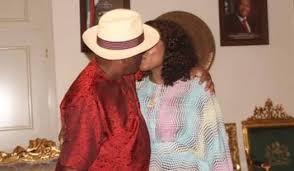 For winning the election tribunal in October of 2019, Governor,
Nyesom Wike celebrated it with a long romantic kiss with his wife,
Eberechi Wike at the Government House, Port Hacourt 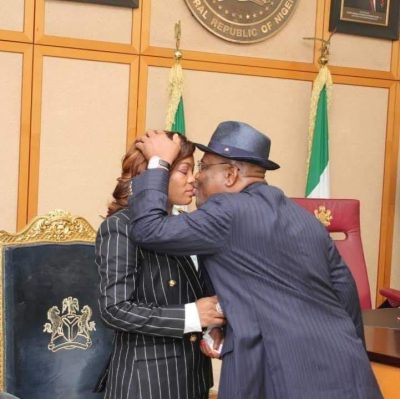 And just recently, on January 7th 2020, he publicly kissed his wife shortly
after the swearing-in of Judges at the Government House Port Harcourt 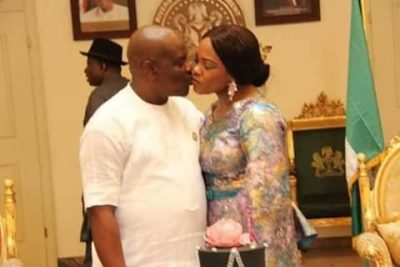 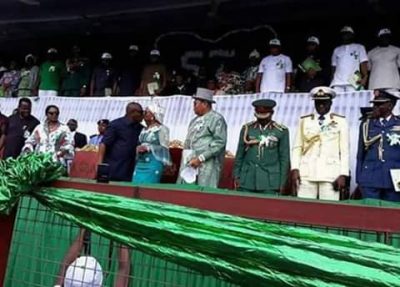