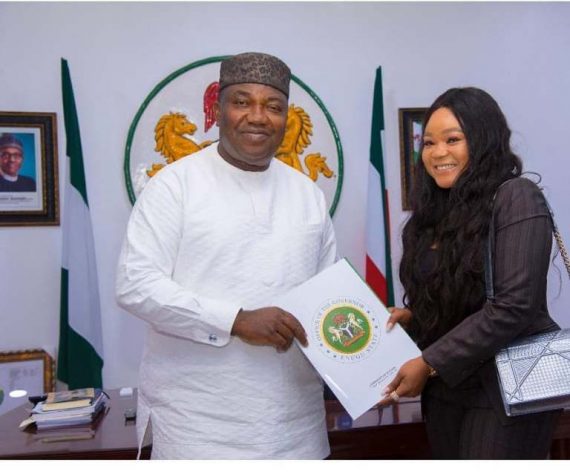 American Gangster’ Drug Kingpin, Frank Lucas dies at 88
20 budding writers enter final stage of Dusty Manuscript contest
Nollywood gets $1m from China, South Africa to fund movie making
Ifeanyi Ugwuanyi, Enugu State Governor, has appointed Nollywood actress Rachael Okonkwo, as Enugu State Ambassador on Youth Development. The actress announced the good news via her Instagram page, where she shared a photo of herself and the governor holding what appeared to be her appointment letter.“I am overwhelmed and glad to inform you that I have been appointed the Enugu State Ambassador on Youth Development by the state governor, His Excellency IFEANYI LAWRENCE UGWUANYI (GBURUS). I am humbled that my state found me worthy to represent them and I promise to do my utmost best towards creating positive impact in the lives of Youths and the people of Enugu State at large.

#Enugu State is in hand of God #Nkolinwansukka #Ugommandigbo,” she captioned the photo.

Okonkwo, who is popularly known as Nkoli Nwa Nsukka is a fastrising Nollywood actress and philanthropist. In 2007, Rachael Okonkwo joined the Nigerian movie industry (Nollywood) professionally, after registering with the Actors Guild of Nigeria (AGN) Enugu Chapter, and started attending movie auditions and featuring as minor character in movies.

A recipient of several awards in hounour of her works as an actor, she won the Best Indigenous Comedy Actress at the City People Entertainment Awards in 2014. In 2016, she was nominated for Best Comedy Actress of the Year at the African Magic Viewers Choice Awards for her role as Nkoli in the movie “Nkoli Nwa Nsukka”.

Rachael Okonkwo, who is also a philanthropist, has a special way of giving back to the society. She hosts an annual carnival, which aims at providing free gifts for kids and entertainment to the people. She said the project enables her to interact with her fans.

In 2015, she hosted the first edition of the children’s Easter Carnival, which aimed at giving free gifts to kids during the Easter celebration and was held in Enugu coal city of Enugu State.