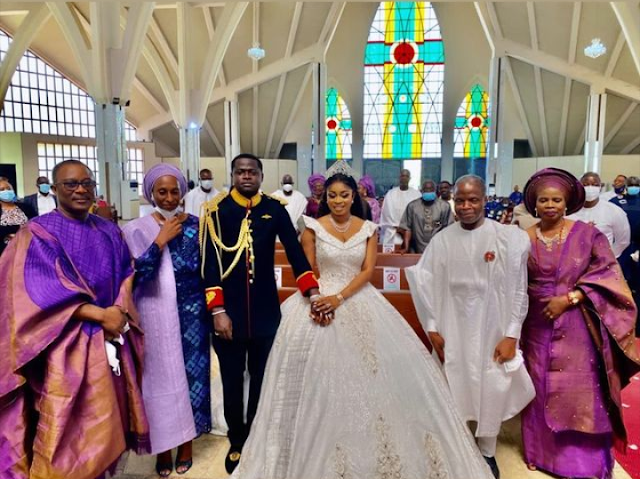 That the wedding of Adeola Smart, daughter of Smart Adeyemi, a senator representing Kogi west senatorial district and her partner, Olusola Michael Awu

That the wedding of Adeola Smart, daughter of Smart Adeyemi, a senator representing Kogi west senatorial district and her partner, Olusola Michael Awujoola, a jeweller popularly known as Malivelihood had all the trappings of wealth and luxury, would be stating the obvious.

The white wedding which took place on Saturday November 5th at the Ecumenical Centre, Abuja, got many talking with the display of affluence. First was the wedding cake which was quite huge. It took 12 bakers who baked it, four months to bake.

Besides the fact that they gave out Hublot wristwatches as wedding souvenirs to guests, with cheapest retailing at $5000, they also gave out a Lexus car to one wedding guest.

The winner of the Lexus car turned out to be a an uninvited guest who is an Uber driver named Austin. After answering correctly a question asked by the wedding compere, the man was declared the winner. He was presented with the keys to the car with an additional N100, 000.

Austin a fresh graduate of Accounting from the University of Abuja, took up offering Uber services  while awaiting his call up letter to observe the mandatory National Youth Service Corps. The couple later added N1 million to his winning cash. Other guests couldn’t help but throw in more money. By the end of the wedding, Austin was reportedly N3.5m richer, in addition to the car.

Adeola and Awujoola got engaged in 2017 when Malivelihood proposed to her at the Heathrow Airport. Known to always spoil his women silly, including celebrities whom he gifts expensive customized bejeweled iPhones, the luxury designer on the last Valentine’s day, gifted his wife, a gold iPad, a brand new black G-wagon, designer suds and a hotel room decorated with heart-shaped balloons and rose petals.

Before meeting Adeola, Malivelihood who resides outside the country was in a relationship with actress, Tonto Dike.