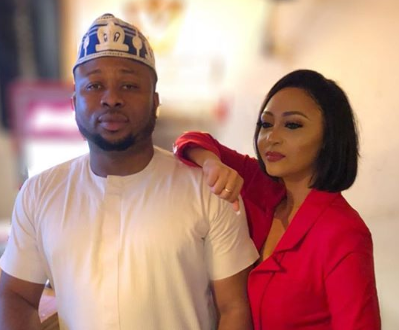 In a birthday message Olakunle penned to Rosy Meurer on Monday, February 15, 2021, he described her as “Mrs Churchill”.⁣
“A special sunrise, on this precious day, a great woman was born. During my hard times when depression would have taken the better part of me, you were my bedrock,” he wrote.⁣
⁣
He also disclosed that she stood by him when the world was against him.⁣
⁣
“When it was like the whole world was against me, you stood by me, even took some missiles because of me,” he added.⁣
⁣
“When I thought I lost it all, you encouraged me to hope on God that he will give me back all l have lost. Happy birthday Mrs Churchill. Age with grace, l have got your back 247 by the special grace of God.”⁣
⁣
Recall that back in 2017, shortly after her split from Olakunle Churchill. Dikeh had accused Rosy Meurer, who was a former personal assistant to Churchill Olakunle, for wrecking her marriage.⁣
⁣
“I am aware of her. I am aware that she is sleeping with my husband. I am aware that my husband is taking care of her. I am also aware that she is the reason that my husband abandoned his son and me for close to two months just before the big foundation thing we did in December,” Tonto Dikeh had disclosed in an interview.⁣
⁣
⁣Rosy Meurer debunked the allegations.⁣ However, both Meurer and Churchill have remained very close friends, with both penning emotional messages to each other on their birthdays.

Tonto Dikeh and ex husband, Olakunle Churchill
⁣
Dikeh and Olakunle who share a son, King together, had one of the messiest divorce Nigeria has ever witnessed in the entertainment industry.⁣
⁣
⁣From videos of physical assault to insults on social media, the former couple kept Nigerians glued to their social media pages for years, as both regaled Nigerians with sordid details of their marriage and subsequent divorce.
Buzz 1673 Wedding & Relationships 295 Churchill 3 Dikeh 5 Rosy 2