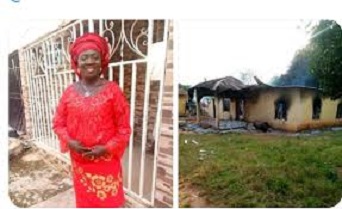 Hours after Governor Yahaya Bello of Kogi State was announced winner of the November 16 election, on Monday, thugs believed to be working for the ruli

Mel B set to release tell-all book on her abusive marriage
Obasanjo releases EFCC report on alleged $16bn power project
Jonathan opens up on corruption in his administration, says he did well

Hours after Governor Yahaya Bello of Kogi State was announced winner of the November 16 election, on Monday, thugs believed to be working for the ruling party burnt alive the Women Leader of Wada/Aro Campaign Council of the Peoples Democratic Party (PDP) in Ochadamu Ward, Mrs. Acheju Abuh, in her home.

Chanting solidarity and victory songs, the thugs, according to neighbours, arrived her house around 2:10pm, surrounded the place, poured petrol all over the house and set it on fire. They ensured that the woman never escaped from the house while it was burning. Some neighbours said they watched in hiding as the thugs set the house on fire.

One of them said: “She tried to escape through a window but was prevented by the burglar proof. The thugs were also shooting in the direction of all the windows and doors so that she would not escape from the fire. She was shouting inside but there was nothing we could do as many of us could not go outside to challenge the thugs.

“We tried calling the police but nobody responded. She was screaming inside until her voice could no longer be heard. When the thugs saw that the house was almost burnt to ashes, they left, shooting”.

Spokesman and Head Communications, Wada/Aro Campaign Council, Faruk Adejoh-Audu, confirmed the killing. He said it was unfortunate that the women leader was killed in a gruesome manner for no reason at all. He appealed to the Inspector-General of Police (IGP), Mohammed Adamu, to ensure the arrest of the killers.