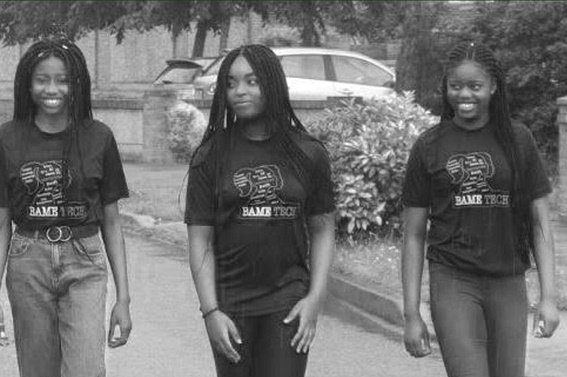 A group of three Nigerian teenage girls have gained accolades after they developed an application that uses music to aid those living with dementia in Ireland.

Dementia is a deterioration in memory, thinking, behaviour, and the ability to perform everyday activities. Although the syndrome mainly affects older people, it is not a normal part of aging.

The three girls identified as Rachel Akano, Margaret Akano, and Joy Njekwe — under the mentorship of Evelyn Nomayo, founder of Phase Innovate — won a prize at Technovation, a technology competition, after beating 1,500 entries from 62 countries with their app named ‘Memory Haven’.

Joy said the app has six main features spanning health check, photo wallet, a music playlist, reminder alerts, a reach-out feature, and a memory game to strengthen cognition.
“We created the reachout feature so that people living with dementia can contact their friends, family, caregivers, doctors, and emergency contacts,” the 17-year-old programmer said.

“The music playlist feature works with facial recognition. It detects the mood of the user and plays playlists bade on their mood. So if they’re sad, it will play something to brighten up their spirits. Our aim is to help as many people as possible. We hope our app can go global one day and reach millions of people who are affected by dementia and just help make their lives somewhat easier.”

On her part, Rachael, 15, said the motivation for the project came after their mentor’s mother, who was a seamstress, died of dementia.
“It just seemed right to do an app to help. The most challenging part was definitely coding. After doing it for so long, I got used to it. Also, with COVID, it was hard for us to meet. To create the app together, we went through WhatsApp,” she said.

“This was difficult. But we made it work. I think the main aim for all of us, what we had in mind when creating Memory Haven even without knowing the amount of success it would bring, was to try and help as many families and individuals as possible because we know first-hand how tough it is to know somebody living with dementia.”

It is estimated that up to 55,000 people are living with dementia in Ireland alone. And around 50 million suffer the condition globally, according to the World Health Organisation (WHO) data.
“I hope this app will inspire other young people to get involved in technology and realize the opportunities that we have to make a difference in our communities. We found out that dementia is not just a huge problem in Ireland but in fact globally. When the app is released, we hope to reach as many people as possible living with dementia.”