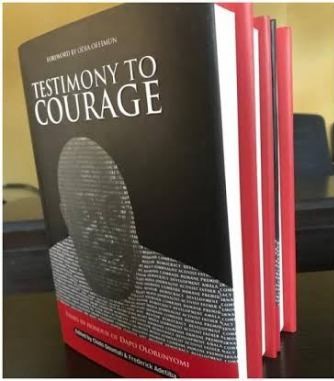 ‘Testimony to Courage’ by Dapo Olorunyomi

The War on Women by Sue Lloyd-Roberts
The Pressure Cooker by Nkiru Olumide-Ojo
Leah Sharibu: The girl Boko Haram left behind by Reno Omokri

Testimony to Courage, write by renowned journalist, Dapo Olorunyomi, publisher of Nigeria’s foremost multimedia and investigative newspaper, Premium Times, and the Executive Director of Premium Times Centre for Investigative Journalism (PTCIJ), a centre committed to media development in Nigeria and on the continent of Africa The book which is a collection of essays in honour of the author, it is invariably about Dapo Olorunyomi, his life’s passions, and about courage as a civic virtue.

Courage, on its own could be both virtue and vice. As an end in itself, it is meaningless. It only makes sense as a means and its elevation to virtue assumes the existence of a larger goal into whose service it is pressed with consistency. Herein lies the strongest message of the book. The courage to which this book testifies is of a more fundamental variety than that of a media practitioner or of an investigative journalist.

It is about the courage to seek to re-make society away from the hierarchies that make demi-gods of a few, tarnish the other with toxic prejudice and diminish opportunities for everyone. It is a courage born of educated curiosity and underpinned by the inexactness of an experimentalist. It is courage of the wayfarer’s variety defined by a journey on which the destination may be known but the route unclear. It is this uncommon courage that Dapo Olorunyomi continues in different forms to embody.