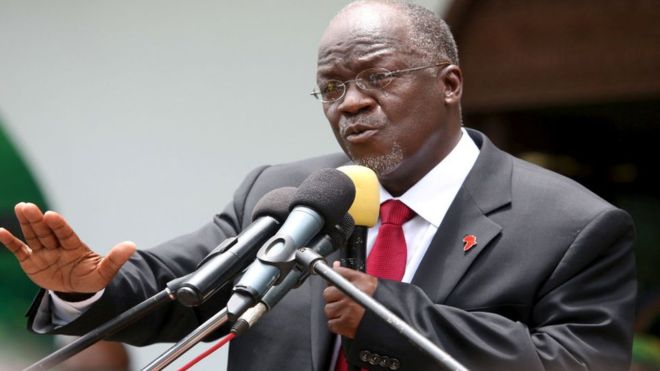 Tanzanian President, John Magufuli has urged women in the country to set their ovaries free and bear more children as a way to help boost the economy

Tanzanian President, John Magufuli has urged women in the country to set their ovaries free and bear more children as a way to help boost the economy into a regional powerhouse, a step critics said would instead worsen inequality and poverty.

“When you have a big population you build the economy. That’s why China’s economy is so huge,” he said, citing India and Nigeria as other examples of countries that gained from a demographic dividend.

“I know that those who like to block ovaries will complain about my remarks. Set your ovaries free, let them block theirs,” he told a gathering in his home town of Chato.

Since taking office in 2015, Magufuli has launched an industrialisation campaign that has helped buoy economic growth, which has averaged six to seven per cent annually in recent years.  But he has said a higher birth rate would achieve faster progress.

Tanzania has sustained relatively high growth, averaging 6–7 per cent a year, over the past decade. At the same time, the East African nation of 55 million people already has one of the world’s highest birth rates – around five children per woman.

Data from the UN Population Fund UNFPA shows Tanzania’s population is growing by about 2.7 per cent a year while most public hospitals and schools are overcrowded and many young people lack jobs. UNFPA says about a third of Tanzanian married women use contraceptives, but Magufuli has criticised Western-backed family planning programmes implemented by the health ministry.

In 2018, Magufuli said curbing the birth rate was for those too lazy to take care of their children, and the health ministry barred broadcasting of family planning ads by a U.S.-funded project. While Tanzania’s poverty rate – people living on less than one dollar a day – has declined to about 26 per cent as of 2016, the absolute number of poor citizens has not because of the high population growth rate, according to the World Bank.

Tanzanian opposition leaders have criticised Magufuli’s stance, saying the country’s already rapid population growth is a time bomb, and disapproving remarks surfaced on social media. Others said it was simply bad economics for Magufuli to urge Tanzanians to have more babies.

“High population growth in Tanzania means increased levels of poverty and income inequality. Women’s ovaries should never be used as a tool for seeking economic prosperity,” said a rights activist based in Dar es Salaam, who asked not to be named to avoid possible repercussions from the government’s ongoing review of registration of non-governmental organisations.