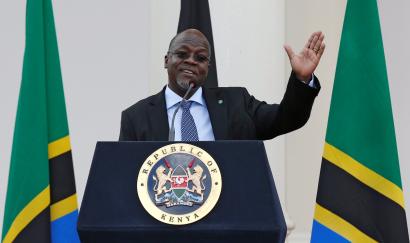 President of Tanzania, John Magufuli said on Thursday that universities and sporting events would resume next month after he declared that prayer had

President of Tanzania, John Magufuli said on Thursday that universities and sporting events would resume next month after he declared that prayer had spared the country the worst of the coronavirus, even as critics say cases are soaring, the AFP is reporting.

Magufuli has repeatedly played down the gravity of the pandemic, and it has been three weeks since the country released official data on case numbers, which stood at 480 with 16 deaths on April 29.

However, while the US embassy has said there was evidence of “exponential growth” and the opposition denounces a dangerous “cover-up”, Magufuli is proceeding to open up the East African nation.
“We have decided to reopen universities starting June 1, 2020,” Magufuli said at a political event in the capital Dodoma, adding that a decision on schools would be taken later.

He said sports events would resume on the same date, with social distancing measures taken for spectators.
“In the current trend, I have not heard any sports person died from the coronavirus and that means sports are not only important for fun but also in the fight against the viral disease,” he said.

The closing of schools and universities, the halting of sports events and flight restrictions were the only measures taken in Tanzania to curb the spread of the virus. On Tuesday, Tanzania lifted restrictions on flights and said those entering the country would no longer need to undergo mandatory quarantine.

However, Magufuli said on Sunday that cases had drastically dropped in hospitals following prayers. He declared three days of prayer starting Friday to thank God, while Dar es Salaam regional commissioner Paul Makonda has urged residents to come together and play music and make as much noise as possible on Sunday to celebrate.