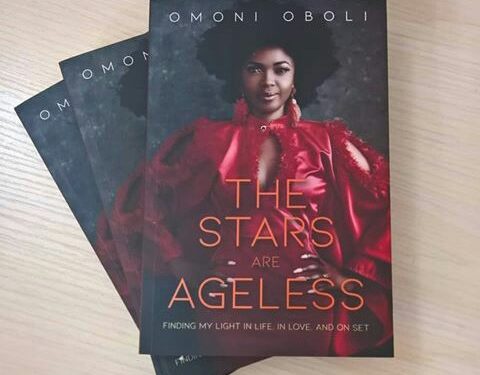 ‘The Stars Are Ageless: Finding my light in life, in love and on set’ by Omoni Oboli

In celebration of her 40th birthday earlier this year, actress, producer and designer, Omoni Oboli decided to open up about her life’s story in a tell

‘Memoirs of a professional bridesmaid’ by Nneka Ijeoma
‘Born a Crime: Stories From a South African Childhood’ by Trevor Noah
Activating success: A compendium of first 100 episodes by Love Idoko

In celebration of her 40th birthday earlier this year, actress, producer and designer, Omoni Oboli decided to open up about her life’s story in a tell all book she aptly titled, ‘The Stars Are Ageless: Finding my light in life, in love and on set.’ The book, an avenue through which she shares her journey through life, marriage including the issues surrounding her controversial movie, ‘Okafor’s Law’, is a 133 paged memoir that gives readers an in-depth view of the things that have shaped her into who she is today and how she has used them to her advantage.

On marriage: Omoni Oboli opens up on her spontaneous decision to marry her husband, Nnamdi whom she dated for 5 months. Rather than paint a glossy outlook on her journey through marriage, she chose to bare the fact that they went through a rough patch and at a point they relied on fairly used clothes. She said, “…We both bent down to select second-hand clothes because, at the end of the day, currency is currency and pride does not pay the bills.”
Today they have been together for all of 17 years and hard work has made them both rub shoulders with the high and mighty.

On motherhood: A mother to three handsome young men, Omoni Oboli revealed that she had a miscarriage before the birth of her first child. That she was overwhelmed with grief would be simply putting it mildly but with her husband by her side, they were both able to overcome that momentary loss.

On her late father: She doesn’t shy away from talking about her relationship with her father or how that his passing on tragically, as a result of a car accident got her shattered. Born into a polygamous family, Omoni Oboli tells what it is like to have to fight for her father’s attention with eight other siblings.

On her special friend: She also reveals in her book about her friendship with makeup entrepreneur, Tara Durotoye and shockingly, discovering that they are cousins.

On movie making: She narrates her first encounter with the movie industry in 1996 when Nollywood as it is presently called now, was still an experimental project of a collective of creatives and how that she found her place in the burgeoning industry and made a mark.

On ‘Okafor’s Law’: Omoni Oboli narrates the events leading up to the infamous halting of the movie premiere by a court injunction from movie producer, Jude Idada who accused her of stealing his creative work. She however doesn’t directly deny or accept responsibility, choosing instead to deliberately leave readers to come to that conclusion themselves from reading the facts as stated in the book.