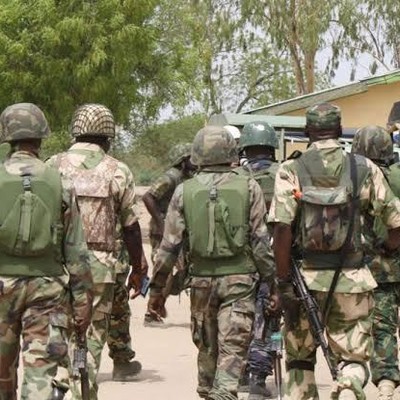 Five Nigerian soldiers have been declared wanted by the Nigerian Army after they absconded with a large amount of cash owned by a Very Important Personality.

According to Premium Times, the victim of the robbery is Hakeem Otiki, the general officer commanding, 8 Division of the Army, based in Sokoto. Sources said the soldiers were detailed on July 11 by Mr Otiki, a major general leading the military operation against bandits in the Northwest, to escort huge cash to Abuja. The source of the money and exactly where it was being taken to in Abuja remained unclear.

After they escorted the cash from Sokoto to the Nigerian Army airstrip in Jaji, Kaduna State, the soldiers refused to load the money into a military jet that was supposed to airlift it to Abuja. They had conveyed the cash from Sokoto to Jaji in a convoy of a Toyota Hilux truck and a Buffalo gun truck. The VIP (said to be Mr Otiki) was said to be in the white Toyota truck while the soldiers were in the gun truck during the roughly 400 kilometres journey.

According to sources, on arrival at Jaji, the five uniformed men; two corporals and three lance corporals connived amongst themselves to share the cash. They then deserted military service.
“They also removed all their uniforms and abandoned their rifles in the vehicles at the air strip in Jaji,” a top military source with details of the incident said.

It was not immediately clear how much the cash was, but military sources estimated it ran into billions. The soldiers were detailed from the Nigerian Army Infantry Corps Centre, Jaji, where Mr Otiki was once a commander. He moved them to Sokoto when he was transferred to head the 8 Division in March. A military source said the soldiers have long been monitoring the activities of their superiors based on the functions they had delegated to them in the past.

Their last known locations have been identified with geolocation equipment, a source said. The Army had also commenced efforts to freeze their bank accounts amidst the manhunt.