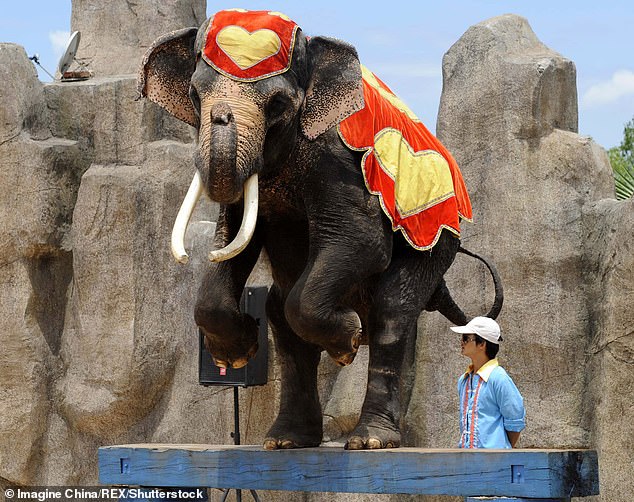 An adult male elephant has trampled its keeper to death in front of shocked visitors at a zoo in southern China. The two-tonne mammal, aged 56, was sa

London bridge attackers unveiled by police
Trump: Oscar mix-up happened because the focus was on attacking me
Macron promises reconstruction of Notre-Dame cathedral after major fire as Gucci CEO pledges $113m towards it.

An adult male elephant has trampled its keeper to death in front of shocked visitors at a zoo in southern China. The two-tonne mammal, aged 56, was said to be desperate to mate while stomping on the animal carer last week in Changsha, the capital of Hunan Province. The attack occurred just before an animal circus show last Tuesday and was filmed by tourists waiting to watch the performance.

The Asian elephant, called ‘Ai A’, had been living in Changsha for 10 years before the incident and has a ‘gentle’ temperament, according to Changsha Ecological Zoo where the tragedy took place. It was waiting to enter the performance venue when it launched the assault on the worker, known by his surname Bu, the zoo said in a social media statement yesterday. Five other keepers tried to calm down the hormone-driven elephant before taking Bu to hospital.

The victim was pronounced dead by doctors after emergency treatment failed. Footage circulating on Weibo, the Chinese equivalent to Twitter, shows three elephants, including ‘Ai A’, standing on the performance ground. It then shows ‘Ai A’ dragging a man, who appears lifeless, along the ground. One male eyewitness is heard yelling ‘gone, gone’ indicating that the man could be dead while others are heard lamenting over the loss.

The attack was caused by the fact that ‘Ai A’ was in ‘musth’ at the time, experts from the zoo suspected. When a male Asian elephant is in a state of ‘musth’, its urge to mate goes into overdrive, and its levels of testosterone and other hormones are elevated. It becomes more aggressive and fights with other male elephants to compete for partners. It remains unclear if the other elephants at the scene were male or female.

According to DailyMail, the zoo has kept ‘Ai A’ in a separate enclosure away from other elephants. Changsha Ecological Zoo keeps a total of six Asian elephants in a pavilion occupying 1,271 square metres (13,681 square feet). All elephants are trained to carry out circus stunts, including giving massages, kicking football and swinging hula hoops. The zoo has vowed to prevent similar incidents from happening in the future.