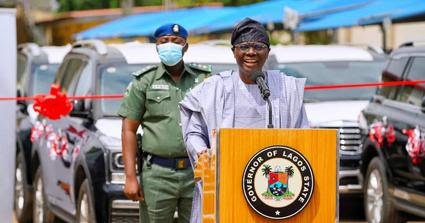 The Lagos State Government on Wednesday handed over 51 Sport Utility Vehicles (SUVs) and eight houses to judges of the State High Court. It would be

The Lagos State Government on Wednesday handed over 51 Sport Utility Vehicles (SUVs) and eight houses to judges of the State High Court.

It would be the second time in a year that official vehicles are given to members of the state’s judiciary. Last October, the governor gave out 50 official cars to magistrates to aid their duties.

Speaking at the handover ceremony at the High Court, Ikeja, Lagos State Governor, Babajide Sanwo~Olu said that efforts to build a strong and formidable judiciary in the state were on course.

He said that no arm of government in the state would be deprived of requisite tools to perform its statutory duties. He said that his administration would continue to support the judiciary and raise the bar of legal practice in line with global standards.

”In handing over these 51 vehicles to our judges and eight houses to the newly appointed judges of the State High Court, we are ensuring that our judiciary has all it takes to seamlessly perform its duties as the bastion of the common man.

He said that the state government would continue to provide the necessary training and infrastructure required to ensure that the integrity of the judiciary was not eroded.

The governor said that he had already approved a complete renovation of decrepit courtrooms in the two courts. He said that his government would not evade its responsibility of creating conducive ambience for the judicial staff to engage in their duties.

The Chief Judge of Lagos, Justice Kazeem Alogba, described the event as “double grace” for members of the judicial arm in the state.

Alogba said that the magnanimity of the Sanwo-Olu-led executive was unprecedented in the annals of Lagos’ judiciary.

“It is the first time a Governor will be giving out vehicles to judges and accompanying the gesture with gift of houses. It takes a man with a large heart to be committed to satisfying the needs of an arm of Government he is not leading. Since inception of his administration, Mr Governor has been swift in responding to our requests and this gesture shows he is committed to improving administration of justice in Lagos,” he said.