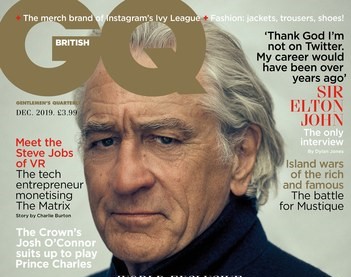 Veteran actor, Robert De Niro, who is a notorious critic of President Donald Trump and his administration, is the December cover star British GQ Magaz

Diddy and his kids are family goals on the cover of Essence magazine
Seven distinct things about The Weekend as he covers Forbes Magazine June 2017
Visual artist, Laolu Senbanjo collaborates with Bvlgari for Ltd edition perfume

Veteran actor, Robert De Niro, who is a notorious critic of President Donald Trump and his administration, is the December cover star British GQ Magazine and in his interview with the lifestyle magazine, the twice married, twice divorced actor dragged Trump by his hair. He called Trump a buffon who is going to “ruin this country” and has blood on his hands. 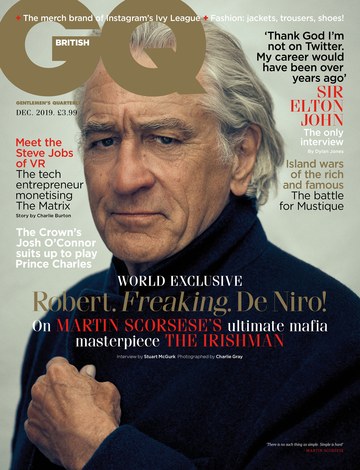 When asked about the pipe bomb sent to him by a Trump supporter, Cesar Sayoc, he said,
“I think all this stuff with Trump and all his shenanigans and nonsense is what is setting the tone for what is going on. We all know it. It’s beyond a disgrace. He’s a low-life. He’s going to ruin this country.”

He continued: “He’s beyond a horrible person. I went on television the day after he was elected and I said, ‘I’m willing to give him the benefit of the doubt.’ But he’s worse than we ever thought he would be.”

The 76-year-old went on to lambast fans of Trump’s successful reality series, ‘The Apprentice’ for selling people on his qualifications to run the country.
“He’s an idiot. He’s a fool. He’s a buffoon. He’s silly. He’s tacky. He’s dangerous. That stupid show ‘The Apprentice,’ people bought it. They buy into it… They created a monster.” 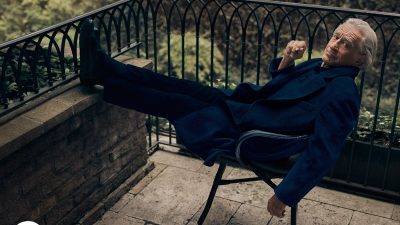 The interview took place on the same day that 22 people were killed in an El Paso, Texas Walmart by a shooter who said he specifically targeted Mexican people. When asked about the massacre, De Niro was quick to blame the president’s rhetoric as well.

“Yeah, I think he does. And everyone is realizing that now, more and more,” he said when asked if Trump has blood on his hands. “It’s so preposterous that the NRA has a grip on the Republicans. It’s all about money. They’re beyond shame. Those [gunmen] are crazy people, but they’re inspired by Trump and what he’s allowed. It’s all subtle but it’s all there. He’s allowed it. He starts it. He encourages it.”

In June 2018, he actually got the president’s attention. Trump dressed the actor down in a pair of tweets calling him a low ‘IQ individual.’
“Robert De Niro, a very Low IQ individual, has received too many shots to the head by real boxers in movies. I watched him last night and truly believe he may be ‘punch-drunk.’ I guess he doesn’t realize the economy is the best it’s ever been with employment being at an all-time high, and many companies pouring back into our country. Wake up Punchy!”