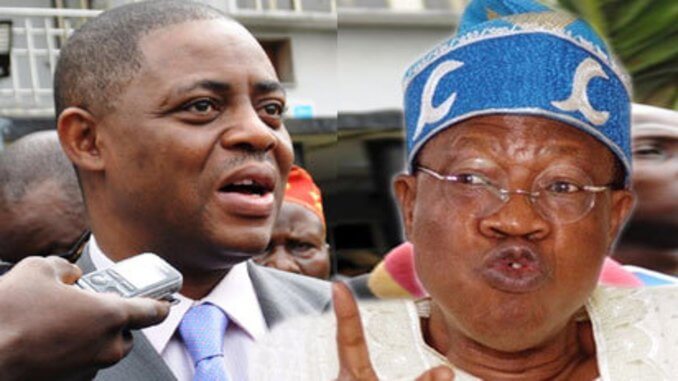 Former Minister of Aviation, Femi Fani-Kayode has launched a withering attack on the Minister for Information, Lai Mohammed, calling him a very sick m

Former Minister of Aviation, Femi Fani-Kayode has launched a withering attack on the Minister for Information, Lai Mohammed, calling him a very sick man. Fani-Kayode, a stalwart of the Peoples Democratic Party (PDP), was reacting to Mohammed’s accusation that the US is sowing the seed of religious mistrust in Nigeria for including the country on its list of governments that have perpetrated or tolerated severe violations of religious freedom.

The inclusion of Nigeria to the watchlist was announced by the U.S. Secretary of State, Mike Pompeo, who had also renewed the placement of Comoros, Russia, and Uzbekistan on the same list. Mohammed had dismissed the inclusion as “misleading”, adding that the United States “fell for the antics of the discontented and the unpatriotic few” who will not hesitate to hang Nigeria out to dry on the altar of their inordinate ambition and their sheer animosity towards the regime of the President, Major General Muhammdu Buhari (retd.).

Reacting, an angry Fani-Kayode took to Twitter to lambast the minister as a “pathological liar”.
“U.S. is sowing the seed of religious mistrust in Nigeria”- Lai Mohammed, Min. of Information. This is the same repugnant & ugly little creature that told us in 2014 that banning Boko Haram & labelling them terrorists was “unjust”. Lai is a pathological liar & a very sick man.

“Like Satan, he was “a liar and a murder from the start”. Lying comes naturally to him because that is his nature, his name and what he came to the world to do. He and his master Buhari complement each other very well. Both are dangerous, mendacious and insensitive. Not only are the Americans right about the vicious & murderous persecution that Christians are faced with in parts of Nigeria but they are also right about their fears for Christian’s & religious persecution in our country. We as Nigerian Christians welcome their concern.

“This brings us to a wider issue. As an Anago & a proud son of Oduduwa, I am disgusted & disturbed that most of those that attempt to defend the indefensible actions & policies of Buhari are fellow Oduduwans and Anagos like Lai Mohammed, Femi Adesina & Yemi Osinbajo. Whatever happened to us as a people that such filthy garbage, servile quislings and gutless and incredulous characters are amongst those that are representing us at the Federal level. The Anagos and the sons and daughters of Oduduwa can surely do better than that!