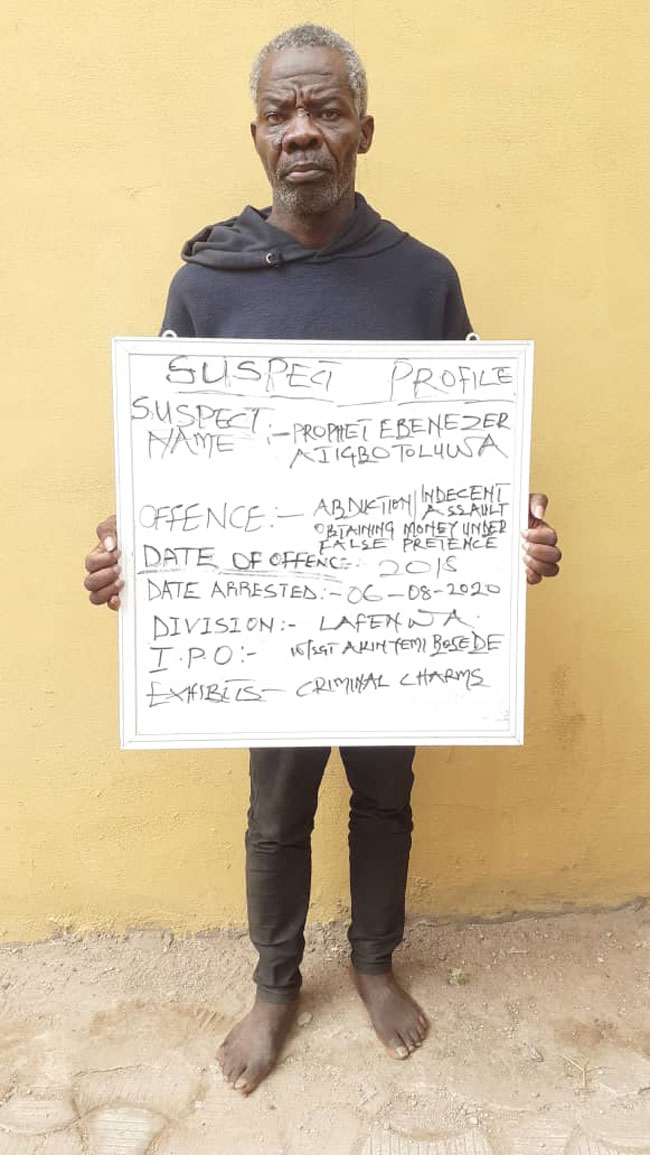 The police have arrested a man said to be a prophet who is the founder and general overseer of the Church of the Lord at Olomore in Abeokuta, the Ogun

The police have arrested a man said to be a prophet who is the founder and general overseer of the Church of the Lord at Olomore in Abeokuta, the Ogun State capital. In a statement on Sunday, the police explained that the suspect, Prophet Ebenezer Ajigbotoluwa, was apprehended by men of the Ogun State Command for defiling and impregnating two underage sisters.

His arrest followed a report by the mother of the victims who reported at the police station Lafenwa that she fell sick sometime in 2018 and was taken to the suspect’s church for spiritual healing. The victims’ mother said the pastor took advantage of her sickness and asked her entire family of six to move into the church premises to avoid being afflicted with the same sickness.

The prophet was said to be having sex with the girls who were 16 and 13 years, unknown to their mother.
“The pastor impregnated the two underage girls and went on to procure abortion for them in a private clinic. Aside from this, the prophet also defrauded the family of N2 million cash which he took for what he called spiritual cleansing,” said the statement signed by the command’s spokesman, Abimbola Oyeyemi.

It added, “Upon the report, the DPO Lafenwa division, CSP Muraina Ayilara, led his men to the church but the place has been deserted. The CP then directed that the suspect be hunted for and brought to book.”

According to the statement, the DPO and his men embarked on intelligence and technical-based investigation which led to the arrest of the prophet at about 5am on Thursday last week while some dangerous charms were said to have been recovered from his home. On interrogation, the suspect confessed to have committed most of the allegations levelled against him, the police said.

Ajigbotoluwa reportedly explained that it was the reason why he ran away when he heard that police were on his trail. Following his arrest, the Commissioner of Police in Ogun, Edward Ajogun, directed that the suspect be transferred to the State Criminal Investigation and Intelligence Department for discreet investigation. He also warned those hiding under the umbrella of religion to perpetrate evils to desist from it or get ready to meet their waterloo.

The police commissioner also called on residents to be wary of those he described as wolves in sheepskin masquerading as men of God. Such persons, according to him, are out to milk their victims dry before destroying their lives.