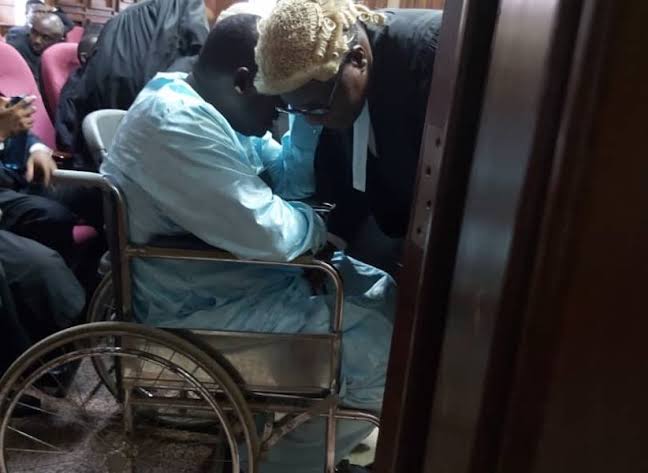 Family of ex-chairman of the Pension Reform Task Team Abdulrasheed Maina have revealed that Maina had been on life support medication for over 15 years. In a statement signed by Abdullahi Usman, the family also disclosed that Maina had been surviving on supports he gets from family and relatives since leaving office.

The statement was in reaction to an online publication alleging that the former pension boss who was brought to court in a wheel chair at his last trial was attempting to deceive the court and Nigerians with ill health. They described as blatant lie, allegations that the ex-pensions boss was getting presidential treatment at the Kuje prisons and that he had also bribed the prison officials.

“Our attention has been drawn to news headline published online by Sahara Reporters insinuating falsehood concerning the health and trial of the former Pensions Funds chief, Abdulrasheed Maina, the family’s statement read in part.

“Contrary to the report, we wish to clarify on some allegations made by the news outlet concerning his health situation and the ongoing trial. It is absolutely not true that Maina is receiving any presidential treatment in Kuje prison where he is being detained. He is placed under the usual prison conditions in an uncomfortable cell that is dilapidated.

“It is also a figment of the imagination of those who concocted the lies that Maina is receiving visitors at will. It is in fact a more difficult task than the usual prison processes of visiting detained person, to gain access or be allowed to visit Maina in detention. Several family and friends have made efforts to see him but all to no avail. It is indeed embarrassing to the Assistant Comptroller of Kuje prison to have been falsely accused of receiving cash bribes to delay or stop presenting Maina before court with sole intention to hinder justice when the need arises as feigned by the online news medium.

“How and where would Maina that is not allowed visitors get cash to bribe any official, comes to every right-thinking mind because it is a blatant lie. Maina was on life support, medication for over 15 years, you can confirm this from his medical records. Maina had survived on control drugs treatment for many years and his condition got deteriorated due to lack of access to his prescribed medications while in detention, a hereditary health condition also being faced by his son Faisal Abdurrasheed.

“He also suffers severe back ache due to the ill-condition of his place of detention. Recently, Maina spent three days in the prison hospital and is seriously indisposed to stand trial in that condition. The court acted rightly based on medical reports presented to it for which it moved the case further to allow him resuscitate. We wish to disabuse the mind of the general public that Maina, who is surviving on support from friends and relatives since he left his position, has any money to the extent of using it to compromise witnesses through bribery. This is also an insult on the presumed witnesses to be presented before the court by his accusers.

“It shows a sense of desperation on their side. In as much as it would not be ideal to accuse his detention of being purposely done to give room to present fake witnesses to the court, it is also wrong to claim that if he is released on bail he would bribe the witnesses. Are they paid by his accusers to stand against him? We wish to remind the general public that Maina is only a victim of circumstance. He was in a position where a lot of people thought they could exploit and loot the pension fund which he disallowed. He is today paying the price for protecting the pension funds from looters and extorting funds termites. We therefore call for justice not only be done but be seen to have been done.”