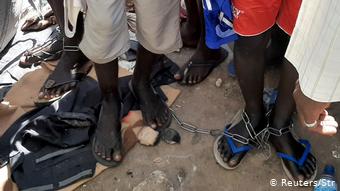 Over 300 children found chained at religious centre in Daura

The police have shut down a religious centre housing some “maltreated children” in the Sabon Garin area of Daura in Katsina state. Sanusi Buba, commis

The police have shut down a religious centre housing some “maltreated children” in the Sabon Garin area of Daura in Katsina state. Sanusi Buba, commissioner of police said an investigation showed that the place had been in existence in the last 40 years. Buba said some children who fled the centre raised the alarm, leading to a police raid.

However, on Sunday, a total of 360 inmates at the centre reportedly escaped after breaking the burglary proof. Buba said there were six rooms in the facility and each of the rooms accommodated over 40 inmates who were dehumanised. The Katsina police commissioner said some of the children, who have now been rescued, were found in chains. Buba said some of the inmates were handcuffed and compelled to sleep in rooms that were not ventilated.

“We would mount surveillance to fish out such culprits subjecting children to servitude,” he said.

Faruk Faruk, Emir of Daura, called on the police and other relevant security agencies to carry out a thorough investigation on the issue. The emir, who expressed shock at the discovery, said it was a surprise for such a thing to happen in his domain. Recall that a similar incident had happened in Kaduna where about 400 children were found in chains, having scars of torture on their body at a religious school in a Kaduna town.