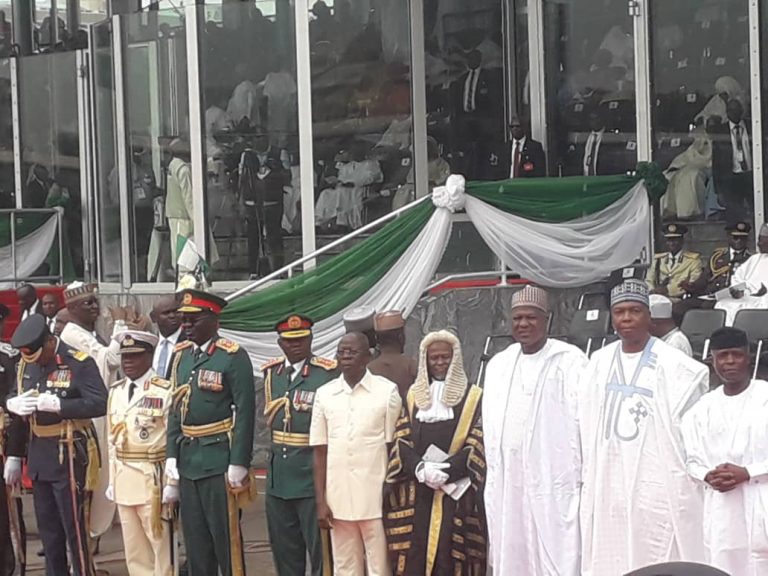 The national chairman of the All Progressives Congress (APC), got embarrassed for breaching protocol during the inauguration of President Muhammadu Bu

The national chairman of the All Progressives Congress (APC), got embarrassed for breaching protocol during the inauguration of President Muhammadu Buhari on Wednesday. The APC national chairman had joined Vice-President Yemi Osinbajo; Senate President Bukola Saraki; Yakubu Dogara, speaker of the house of representatives, and the service chiefs who were awaiting the arrival of the president at Eagle Square, Abuja and stood in between Ibrahim Muhammad, acting chief justice of Nigeria, and service chiefs

The Commander, Guards Brigade, Brig. Gen Umar Musa walked up to him to give him a marching order and after a short conversation on how he was breaching protocol, relocated him just as Abayomi Olonishakin, chief of defence staff, filled the space created by Oshiomhole’s exit. Although still in the queue, the APC leader found himself in between Mohammed Adamu, inspector-general of police, and Boss Mustapha, secretary to the government of the federation. 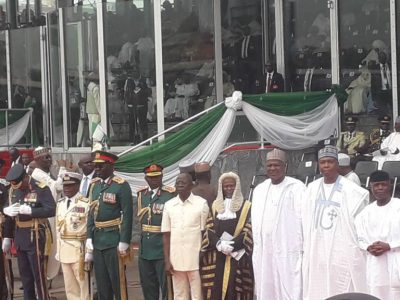 Before the marching order for breaching protocol at inauguration 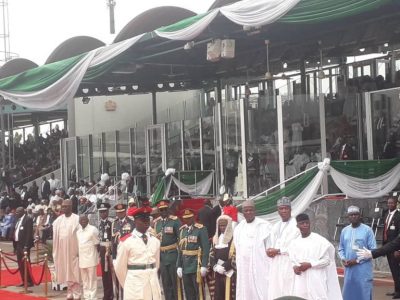 After the marching order for breaching protocol at inauguration

Several dignitaries who had a vital role to play in the inauguration of the President had lined up along the red carpet leading to where the President took the oath of office. The dignitaries include: The Chief of Defence Staff, Gen Gabriel Olonisakin; the Chief of Army Staff, Lt.Gen Tukur Buratai; the Chief of Air Staff, Air Marshal, Sadique Abubakar; Chief of Naval Staff, Vice Admiral Ibok Ibas

Others lined up were the Inspector-General of Police, Mohammed Adamu; and the acting Chief Justice of Nigeria, Justice Tanko Muhammad, who administered the oaths of allegiance and office to the President.

Oshiomhole, who stood by the CJN had hoped to shake hands with the President when he passes through. However, the commander of the Guards Brigade promptly asked him to leave the area and return to his seat as he was not allowed to stand along with other government officials.