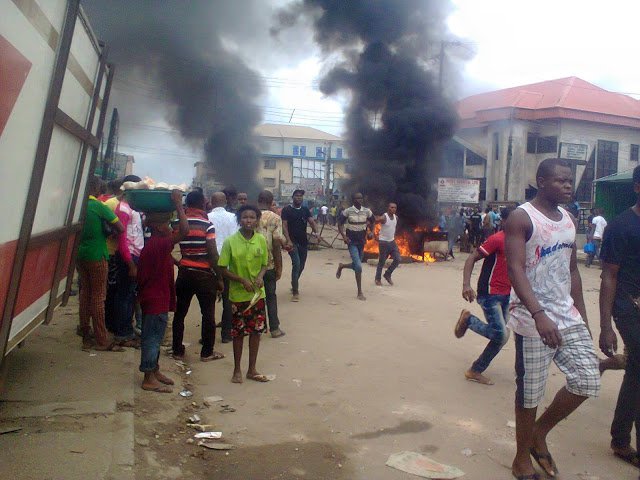 A mob in Umuoru Etiti village, Ubulu Community in Oru West Local Government Area of Imo State, on Wednesday, burnt down the home of a South Africa bas

US gives reason why it placed travel ban on Nigerians
Until Nigerians are secure, we won’t keep quiet – CAN
Here is why returning Nigerians have to pay for evacuation

A mob in Umuoru Etiti village, Ubulu Community in Oru West Local Government Area of Imo State, on Wednesday, burnt down the home of a South Africa based businessman, Declan Nsofor, for allegedly killing his ‘brother’. This followed a viral video that showed Nsofor killing his kinsman, Odenigbo Ife (aka Ideh) in South Africa, during a fight.

Nsofor, in the video, which went viral on Tuesday, was seen fighting Ife and refusing to listen to pleas by people around to stop fighting. At a point, he was seen picking up a large stone and hitting Mr Ife. The ‘victim’ fell to the ground and reportedly died instantly. They were said to be fighting over a business deal gone bad.

According to reports, Odenigbo stood surety for Nsofor over a business deal. But, after several months, Nsofor was said to have foot-dragged in paying the debt, a development that led to the fight. The video incensed the youth from Amorie Ubulu who mobilised and set the house of the suspect on fire, a community source said. Apart from setting the house of the suspect ablaze, the irate youth destroyed all his property.

Police spokesman in the state, Orlando Ikeokwu, confirmed the incident. He said that the police had begun the manhunt for those who set the house ablaze.
“We mobilised to the scene, took photographs of the burnt building. No arrest had been made yet but serious effort is in progress to arresting the perpetrators for possible prosecution,” Mr Ikeokwu said.

See the video of the killing below

Man arrested for killing his benefactor during an argument . South African police arrested a Nigerian known as Batista, and charged him with murder after he allegedly struck a fellow Nigerian man, Ude, with a brick on his head during a dispute at Kempton Park, Johannesburg, South Africa. It was gathered that Ude stood surety for Batista to borrow money from some people but he reneged on the agreement to pay up. However, when pressure became to much on Ude, he approached Batista to honor the agreement, hence the fight. Batista is expected to appear before the Kempton Park Magistrates Court today, where he will face a murder charge. The incident happened on Monday, just before 7pm. .