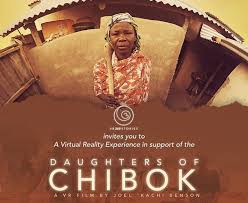 Joel Benson has won the 2019 `The Lion Award’ for best VR story at the  2019 Venice  film Festival. ‘Daughters of Chibok’, a Virtual Reality film i

‘Daughters of Chibok’, a Virtual Reality film is a story of the April 2014 abduction of 276 female students from Government Secondary School, Chibok in Borno State, Nigeria, represents Nigeria and Africa, alongside 12 other Virtual Reality films selected from around the world.

The film centres on Yana Galang, a woman leader in Chibok, whose daughter was among the kidnapped Chibok girls. The film is a stark reminder that the abduction of April 2014 is still fresh in many minds, and there are women still waiting for their children to be returned. The 11-minute short film mirrors Galang’s pain as she hopefully awaits the return of her daughter while struggling to live a normal life as a peasant farmer.

Benson explained the importance of screening the film, adding that the movie was being used to raise funds for the families affected by the Chibok kidnappings. He said, “From April 14, 2014, when the Chibok girls were kidnapped, to date, 33 parents have died as a result of trauma caused by the loss of their children.

“Poverty is added to pain, as most of the mothers of the missing girls are farmers, who can barely scratch enough from the hard Chibok earth to survive and take care of their other children. On April 14 2019, to mark the 5th anniversary of the Chibok kidnappings, my team and I released our VR documentary #daughtersofchibok.

“Since then we have been sharing the film with select audiences, with the aim of raising support for the mothers of the missing Chibok girls. Last week, thanks to all our partners for their support and donations, we were able to make our first donations of fertilizer to 10 of the Chibok women, in order to help them increase their yield.

“Our goal is to reach all 112 mothers who are still waiting for the return of their daughters, and we won’t stop till we touch each and every one of them. We may not be able to bring back their daughters, but we can certainly do something to make their hard lives just a little bit easier,” Benson said.

This is what Joel Benson had to say concerning his winning

Last week I shared pictures and a message of how grateful I was to be at the Venice Biennale, rubbing shoulders with some of the biggest names and the best minds in the world of virtual reality. For me it was great, just to be here, and have my film play alongside theirs. That was enough for me. I never knew there was more to come. As the festival began to wind down, I remember asking the curator if he’d be able to squeeze me in to attend the closing ceremony so I could watch the awards been given out, and he smiled and said he’d see what he could do to get me in. Two days ago he called me and said there’d be no need for that…our film #daughtersofchibok would be receiving an award, so I’d have a seat reserved for me. And so here we are, bringing home The Lion award for Best VR Story. The young boy who roamed the streets of Ijeshatedo during the day and slept in empty churches at night because he had no home to go to, is now on the world stage. Now if that’s not God, I don’t know what is. I thank everyone that has supported me on this crazy incredible adventure…my wife, my friends, my teachers, and my team who’ve had to deal with all my mood swings and mad experiments. God has been too kind to me…I don’t know why…but I’m grateful. I’d have loved to end this with something profound, but I’ll just repeat what the someone in Venice said to me, and hope that it inspires someone – “Joel, you’re this guy that no one had ever heard of, who just came out the blues, and now you’ve put your country on the world’s vr map. You just proved that with faith and courage anyone can soar to the top”. #daughtersofchibok #virtualrealityworld #virtualrealitynigeria #labiennaledivenezia @imisi3d @iamaniwura @northeastihub @vr360stories @cobhamsasuquo @murphy_akande @timski67 @facey813 @iamshabz

In 2018, Benson made his first Virtual Reality film, ‘In Bakassi’, a short film that captures the plight of children living with PTSD in Internally Displaced Persons Camps in the northeast region.