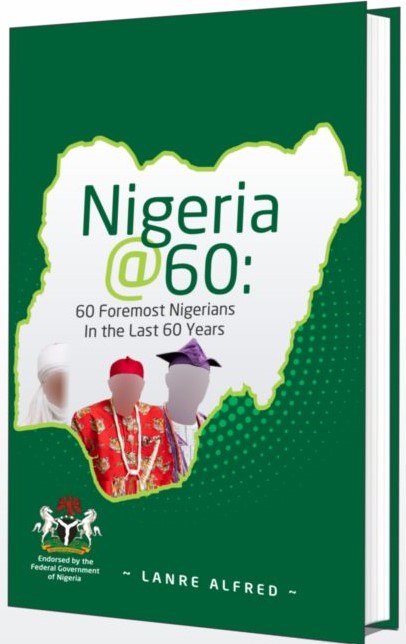 Nigeria @ 60, which is a new offering by former society editor of ThisDay Newspapers, Lanre Alfred was last week released just ahead of the 60th indep

‘Home’ by Ellen DeGeneres
Boss Up! A Guide to Conquering and Living Your Best Life by Chika Ike
The Smart Money Woman by Arese Ugwu

Nigeria @ 60, which is a new offering by former society editor of ThisDay Newspapers, Lanre Alfred was last week released just ahead of the 60th independence anniversary of Nigeria this Thursday. The book which features 60 foremost Nigerians who have left their footprints in the sands of time in the past 60 years, has been hailed as a worthwhile educative and historical work.

According to Lanre Alfred, the motivation behind writing the book was to correct one of the biggest errors of our heritage as a nation is the failure to properly and periodically document in enduring forms, significant events of our national history and the roles of the personages. Hence the book helps to prevent the distortion of the feats and facts of our heroes and leaders.

The book captures a critical period in our 60-year history as a nation; and fills a long-abandoned vacuum by bringing out of the shadows of history a silent army of men and women especially those that had until now, been unacknowledged and under-represented, despite their contributions to the nation we now proudly call ours. Through the individual stories and exploits of our heroes past and present, we’re given an insight into the strength and stamina that they evince (d) in the face of a system geared against them.

With the prologue written by former Senate President, Dr Bukola Saraki and forward written by Ekiti State governor, Dr Kayode Fayemi, the book takes one through an undulating labyrinth of the Nigerian story and points our attention to the mesh of our socio-cultural plurality, which ultimately makes ours a complex political experiment.

Interestingly, Lanre Alfred dedicates the book to businessman, Dr Mike Adenuga the man popularly called ‘The Bull’ as a homage to his humanity and relentless strides at rewriting the African business narrative; for standing tall and wading through odds with the courage of a knight and confidence of a champion. Hugely successful, yet, affectionately humble, ‘The Bull’ as he is widely known is one of those risk-taking individuals that struckout on new paths, rather than travel the worn paths of accepted success to prosper themselves and their society. He has proved over time that if sent to Mars, he would still treat it as a stepping stone to Saturn – the quality of constant invention and self-improvement that has earned him worldwide acclaim and prosperity.