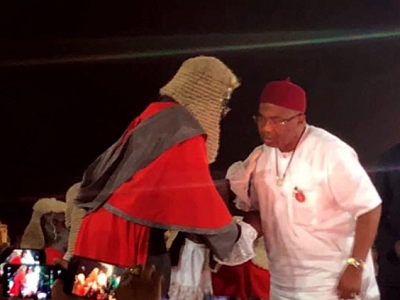 Senator Hope Uzodinma of the All Progressives Congress (APC) has been sworn in as the governor of Imo State. Uzodinma, who was on January 14, 2020

Ihedioha: Reverse judgement to avoid the wrath of God – Anglican Bishops to Supreme Court
Ihedioha: Now we know why Onnoghen was removed – Lagos PDP protests
Ihedioha reacts to verdict removing him as governor

Senator Hope Uzodinma of the All Progressives Congress (APC) has been sworn in as the governor of Imo State.

Uzodinma, who was on January 14, 2020 declared the rightful winner of the March 9, 2019 governorship election by the Supreme Court, took the oath of office at exactly 7.26 pm at the Heroes Square, on Wednesday in the state capital.

He arrived at the venue of the event with his wife and children at 7.15 pm in the company of the deputy governor, Prof. Placidius Njoku. The Chief Judge of the State, Justice Paschal Nnadi, administered the oath of office on Uzodinma and his deputy, Placid Njoku, took the oath of office at 7.19 pm.

Uzodinma took over from Emeka Ihedioha, who was sacked after eight months in office. In his maiden address, Uzodinma announced his intention to look into the accounts and contracts awarded from May 29, 2010 till date. The period covered the tenures of Chief Ikedi Ohakim, Senator Rochas Okorocha and the short-lived tenure of Hon. Emeka Ihedioha.

In view of this, Governor Uzodinma directed the Accountant General of Imo State to forward to his office all all financial transactions between May 29, 2010 till date within four working days. The governor also directed all permanent secretaries to forward to his office all contracts awarded and their statuses from the same period of May 29, 2010 till date. He also directed immediate suspension of all payments and treasury transactions till further notice.

Uodinma said he felt highly fulfilled that at last justice had been served, describing his Supreme Court victory as divine. He commended the judiciary for standing up for truth in spite of the technicalities employed by the lower courts to deny him victory earlier.

Uzodinma said he had forgiven those who conspired to deny him his victory and promised to create an environment of prosperity in the state even as he enjoined his opponents to join his work room to rebuild the state from ruins.