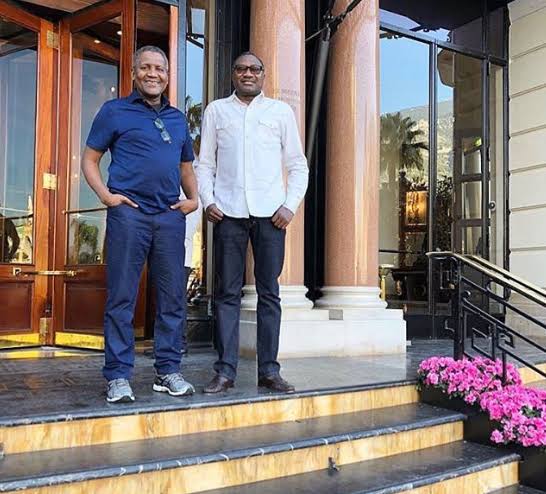 Former media aide to former President Goodluck Jonathan, Reno Omokri has taken a swipe at Alhaji Mohammed Indimi, the late Mai Deribe and generally, billionaires from Northern Nigeria. Omokri said Femi Otedola’s donation of N5bn to his daughter’s foundation to cater for the less privileged in the crisis-ravaged Northeast Nigeria is a big slap on oil billionaires from the region.

Billionaire entrepreneur, Otedola made the donation to the Cuppy Foundation, a philanthropic project of his daughter, Florence Otedola, popularly known as DJ Cuppy, over the weekend. At the event which had in attendance dignitaries from different sectors, Aliko Dangote, who is the owner of the Dangote Group, also made a donation of N100m.

Reacting to the report, Omokri in a post via his social media pages said rather than helping the less privileged, children of northern billionaires are displaying obscene wealth while surrounded by extreme poverty. He wrote:

“‪Femi Otedola has just put the billionaires of the Northeast to shame. Where are the Indimis, the Mai Deribe family and other oil billionaires from the Northeast? Google their names and some of the first pictures you will see are of their children in private jets, marrying Presidents children and displaying obscene wealth while surrounded by extreme poverty.  It took a Good Samaritan stranger to do what natives of the Northeast failed to do! Shame on them and God bless the talakawa that they have refused to look after.” 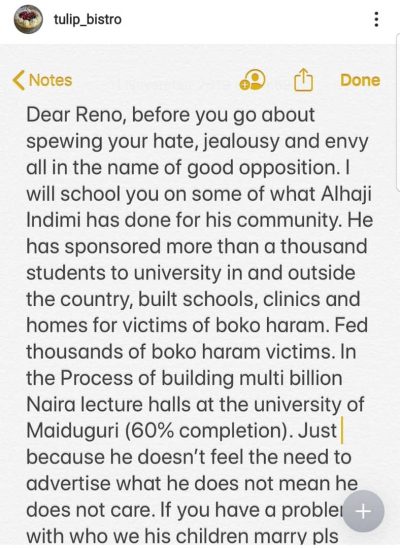 “Pls take that up with god because your spouse is predestined by god only. For you to put Alhaji MAi Deribe in your mouth 16 years after his death, before Boko Haram came into existence just speaks of your bitterness for the wealthy. While we are at it can you pls tell us other than being a former presidential aid, what your accomplishments are and what you have done for your own community. We are not ashamed, we are proud of who we are and what we have done.

“We are a family that feels for the people around us. We are a family of entrepreneurs that employ. Unlike what you may like people to believe but we all started from the bottom. Me and my sister started our business with a muffin pan in my kitchen and We built it to what it is today as did all my siblings. Before telling people to google us, you should have googled us. @renoomokri

Expectedly, Reno Omokri responded. “Dear Indimi Family, I saw your post attacking me. You shouldn’t see my criticism of your obscene display of wealth in the midst of the extreme poverty surrounding you as hate, neither should you see my opposition to your powerful in law, General Buhari, as bitterness,” he began.

“That is rather petty. Opposition is a vital part of democracy, and I am not asking you to do what I have not done. I hate to do this. I would prefer to keep it private. But since you challenge me, please find attached a picture of an orphanage I built with my hardearned money to house orphans from Borno IDP. Yet, I am not from Borno.

“I have also travelled to 36 countries so far in 2019, campaigning for #FreeLeahSharibu, a native of Borno, where you come from. I don’t have one percent of one percent of your wealth. You can’t be flaunting private jets and spending hundreds of millions when you are surrounded by the worst poverty on planet Earth and expect not to get called out!

“There are millions of internally displaced people in Borno. If indeed you guys are doing something, we will see it via the IDPs. Shut me up by making a difference to their lives!”

Not done, Reno proceeded to drag Buhari’s nephew, Mamaan Daura in another post. He said, “Femi Otedola donated ₦5 billion to feed hungry children in Borno and Katsina a day after General @muhammadubuhari and Mamman Daura were celebrating at a London party that costs millions. Buhari is from Katsina. How can a leader be FEASTING while children in his stare are STARVING!

“The Presidential Initiative for the Northeast (PINE) which raised almost ₦25 billion from donors to rebuild the Northeast was a Jonathan initiative. The 165 schools built for almajiri were built by Jonathan. What has General Buhari done to ease the pains of those Northern children for whom Otedola donated ₦5 billion besides partying in London? If you know, I challenge you.”