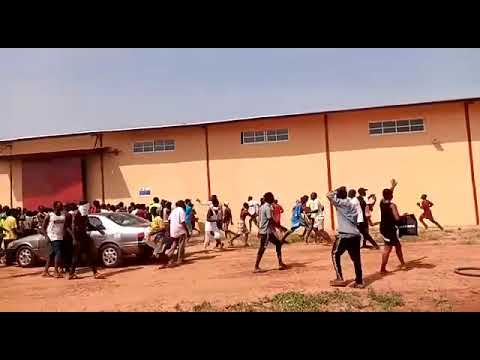 A mob on Sunday morning broke into a large warehouse in Adamawa and carted away food items stored there. A series of videos posted by witnesses fir

A mob on Sunday morning broke into a large warehouse in Adamawa and carted away food items stored there.

The warehouse is located at Kwarnawaya, a community by the Yola-Numan Road near Yola, the state capital.

A subsequent video showed the mob, in their hundreds, getting past the security operatives and succeeding in opening gate of the warehouse and helping themselves to available food items.

The state had seemed aloof to the movement, especially after a trickle of youths, who attempted a protest match were dispersed by the police a little over a week ago.

The Police Public Relations Officer (PPRO) in Adamawa State, DSP Suleiman Nguroje said the police had mobilised officers and men to the place.
“We have heard that hundreds of people have gathered and are looting food stuff at a storage facility in Kwanarwaya. We have mobilised policemen and are on our way to the scene to restore peace,” Nguroje said.

Similarly, despite the curfew put in place by the Plateau State governor, hoodlums succeeded in ransacking another warehouse in Jos. The latest warehouse was filled with fertiliser and the hoodlums carted away several bags of fertiliser and farm implements believed to be from the office of the Plateau Agricultural and Development (PADP).

The thieves broke into the warehouse claiming they were searching for Covid-19 palliative items yet to be distributed. The looted fertilizer were provided by the state government in collaboration with international agencies.

The Sunday incident occurred hours after Saturday’s vandalisation of a warehouse in Bukuru town, where a substantive amount of Covid-19 palliative, mainly food items like rice and noodles, was looted by the hoodlums.

The Plateau State Government had after the Saturday incident reinstated a 24-hour curfew earlier imposed in Jos-North and Jos-South local governments. The curfew was earlier introduced following the violence that occurred after the #EndSARS protest against police brutality in the state.

The state government which had condemned the Saturday looting was yet to react to Sunday incident at the time of this report. 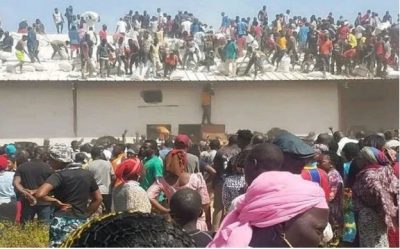 Mob at a warehouse in Jos