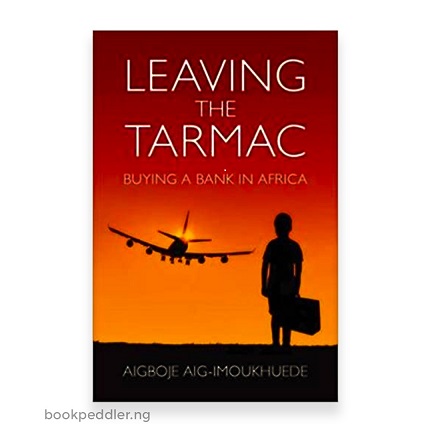 Leaving The Tarmac: Buying A Bank in Africa by Aigboje Aig-Imokhuede

Leaving the tarmac is the most compelling business success story to come out of Africa. When Aigboje Aig-Imokhuede and his team bought Access Bank in

Leaving the tarmac is the most compelling business success story to come out of Africa. When Aigboje Aig-Imokhuede and his team bought Access Bank in 2002, it was one of the smallest and most crisis prone banks in Nigeria then. Their goal was to build it into one of the biggest and strongest banks in the country.

Here is his account of the acquisition in his new book

Aigboje Aig-Imoukhuede, former group managing director of Access Bank, says officials of the Central Bank of Nigeria (CBN) delayed the approval for the acquisition of the lender in 2001 on account of age.

He and Herbert Wigwe, his friend, had signified their intention to acquire the bank but were considered “two young” by the banking regulator. Both of them were 36 when they made what was regarded as an audacious bid.

In achieving the dream of owning a bank, he and Wigwe, both working with Guaranty Trust Bank (GTB) at the time, had engaged industry experts, key stakeholders, and shareholders of their target list of banks. They also appointed a team of advisers consisting of lawyers and investment bankers for support through the process.

The professional banker said his team of advisers led by Albert Okumagba, the late chief executive officer of BGL Securities, had tagged the quest “Project Festival”.

Aig-Imoukhuede said their quest was becoming futile as they found out that their preferred candidates, which were banks that were doing fairly well by industry standards, were too expensive for us to be able to afford.

“On the other hand those that were affordable were either in very bad financial condition and/or operated with values and philosophies which were inconsistent with those we believed in,” he wrote.

However, despite the setbacks they both encountered, “we kept on going, refusing to give up, which is quite possibly the most fundamental rule of true entrepreneurship.”

Aig-Imoukhuede explained that Access Bank was entangled in a CBN investigation regarding widespread malpractices in foreign exchange, which involved a number of Nigerian Banks.

He said the opportunity was flung open when the bank attempted to raise over N1 billion through a public offer for subscription in the latter part of 2001.

“Despite the fact that we conducted no due diligence, doing little more than a ‘back of the envelope’ analysis, we found Access attractive for a number of reasons. Firstly, its board of directors included men of integrity who were well-respected in business circles.

“Secondly, the bank was quoted on the Nigerian Stock Exchange, which implied some minimum standards of governance, and thirdly, its financial safety indicators did not point to an institution that was on the verge of failure.

“While our decision to take up the unsubscribed shares was in effect a leap of faith, it was our belief that since we would be controlling the management of the Bank we were recapitalising, the risk of losing our investment was almost entirely in our own hands.”

Aig-Imoukhuede said to meet up with the N1 billion public offer, an additional N800 million had to be raised, since he and Wigwe had only to N200 million as at that period.

“Once we had raised the money, we then had to make sure that the recapitalisation comply with all relevant laws of the country. We ensured that every step we took in consummating the acquisition was consistent with legal requirements and would meet the expectations of the Securities and Exchange Commission (SEC), the CBN and the Nigerian Stock Exchange.”

After the public offer was approved by SEC, rumours had begun to spread across the financial space that the bank had been bought by “two young guys” from GTB.

“If we had hoped to be welcomed with open arms as Access Bank’s potential saviours, we were soon to be brought back down to earth,” he said.

“The board and management, though having realised what was happening, adopted a defensive posture. They did not buy into the idea of our approach at all, labelling our actions a hostile takeover. Never before had there been a case where ‘mere banking professionals’ could have the temerity to take on established captains of industry and buy their bank. It was unheard of.

“We did face one regulatory challenge in our move to acquire Access Bank and this was the issue of control and management. This was an issue for the Central Bank of Nigeria to determine.”

Notwithstanding that members of the board of governors at CBN knew Aig-Imoukhuede and Wigwe personally, yet “we still had to convince those below them that we were qualified to run a bank, including the Director of Banking Supervision, Ignatius Imala, who was known for his conservative thinking and a tendency to be very suspicious of young bankers.

“Nonetheless, though I had acted as CEO of GTB in the absence of the MD and the DMD, even though both Herbert and I possessed strong professional track records, Mr. Imala still had his doubts and refused to approve our appointment as MD and DMD.”

He compared Imala’s refusal to approve the acquisition to the colonial era where a test was conducted to determine if a child was old enough to go to school, which involved asking the child to put one hand over their head and touch the ear on the other side, whether intelligent or not.

“He stood alone against everyone else around him resolutely refusing to give an explanation for his decision and without his approval we would remain in limbo. Luckily for us he didn’t ask us not to run the bank, he simply said he would not ‘approve it’.

“We were two young men with no godfather behind us and I think Imala found it hard to believe that we had managed to pull off the acquisition of Access Bank without some hidden power pulling the strings behind the scene on our behalf.

“He suspected there was a catch to this seemingly audacious acquisition and chose to take his time approving our appointments, assuming if there was a catch, it would soon reveal itself. How wrong did we prove Imala to be. Despite this hitch we had become the owners of the bank in March 2002. At that time I was still only thirty-six years old, but I already had had ten years of senior management banking experience at GTB.”

Finally, their long quest came to a halt on April 17, 2003 and they assumed control of Access Bank; however, the approval was granted on the condition that it would be in an acting capacity for two years.

“I knew that I was ready to run my own bank, but the policies regarding regulatory approval for me to become chief executive were then rather obtuse and for over a year I ran Access without the stamp of the Central Bank’s formal blessing,” he said.

“After the approval on an acting basis of April 2003, I was not confirmed in the post until 2005, at the end of the two-year period. Although this delay was enormously frustrating at the time, it would eventually work to my advantage when the CBN changed the rules and announced that no one could run a bank as CEO for more than ten years. As it was, I had until 2015 to continue growing the bank and prepare for a smooth succession to Herbert.”

Today, the acquisition process which took almost two years has birthed one of Nigeria’s biggest banks by deposits and assets with presence in eight countries across Africa, including the UK.