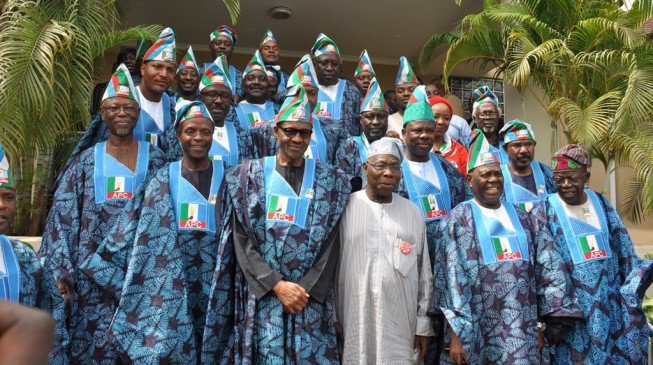 You have spent your own time, leave Buhari alone – Tinubu to Obasanjo

Bola Tinubu, the national leader of the All Progressives Congress (APC), has asked ex-President Olusegun Obasanjo to leave President Muhammadu Buhari alone. Tinubu said this while addressing party members at a stakeholders meeting in Lagos state on Tuesday. The APC leader condemned frequent attacks on the current administration by the former president. He said the criticisms of Obasanjo were in bad faith, adding that he (Obasanjo) could not stop Nigerians from reelecting Buhari.

“Our president, President Muhammadu Buhari has done well, he deserves another term, and we will support him to win because he is our man. Forget about Obasanjo’s letter and his frequent attacks on our president, he cannot stop the president because Nigerians would re-elect him. Obasanjo has spent his own time; he should leave Buhari alone and face his business because he cannot tell us who to vote for. He is part of some of the challenges we are facing in the country today, because he did not lay the right foundation when he was president.”

Tinubu added that the exit of some members of the APC would also not stop the reelection of Buhari, saying the party was unshaken by the defections and was on course to recording victories in the 2019 election. He said the results of the bye-elections in Kogi, Katsina and Bauchi states, in which the APC was victorious, were a precursor to the pattern of the general election.
“Those who want to defect can defect, that is their problem. APC remains unshaken and these people will know the reality in the elections.”