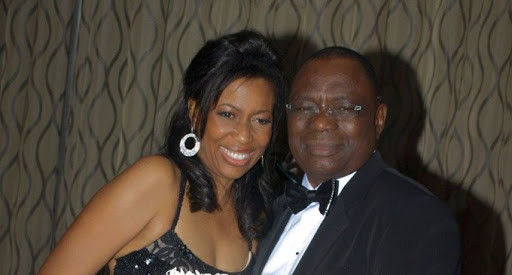 The children of Mrs. Oluwayemisi Ajayi, the widow of Dr. Tosin Ajayi of First Foundation Medical Engineering Co. Ltd, have come out to debunk the news

The children of Mrs. Oluwayemisi Ajayi, the widow of Dr. Tosin Ajayi of First Foundation Medical Engineering Co. Ltd, have come out to debunk the news that the Federal High Court, Lagos, awarded Helen Prest, a mistress of late Dr. Tosin Ajayi, half of his estate.

On 7th of September 2021, Justice Tijjani Ringim of the Federal High Court in Lagos ruled that Prest-Ajayi is entitled to 50 per cent of the net assets of her late husband.

He gave the ruling in a suit by Tomisin Ajayi and Helen as 1st and 2nd Applicants, filed through their counsel Mr Abiodun Jellili Owonikoko (SAN).

The judge granted the 13 reliefs sought by the Applicants following the respondents’ failure to controvert them.

They include that Prest-Ajayi is “entitled to 50% (or so much as the Court may sanction upon audit and valuation) constituting the net assets of the firm, after satisfying all just taxes and debts as family and investment partner of Dr. Tosin Ajayi, from 1996 till 26 April, 2020 to the exclusion of Mrs Oluwayemisi Ajayi;

It also includes, among others, an order directing the Registrar-General to audit and verify the firm’s assets, a perpetual injunction restraining the Registrar-General from recognising Mrs Oluwayemisi Ajayi as entitled to run the firm and a perpetual injunction restraining Mrs Oluwayemisi Ajayi from dealing with the assets and properties belonging to the Defendant and/or Late Dr Ajayi.

However, the late doctor’s first wife, Oluwayemisi and her children have debunked the court judgement, insisting that it is all false.

According to the first child of Mrs. Oluwayemisi Ajayi, Mrs. Olutomi Deru (Nee Ajayi), “the order, which was strangely granted in the absence of the company and our Mum, only granted Helen Prest and her daughter permission to institute their main action and restrained our Mum from running the company pending the determination of the main suit.”

She said the orders were temporary orders and that the court did not make any order granting Helen Prest any share in the estate of their Dad contrary to the blatantly false and sensational stories being circulated in the social media.

According to her, “The court did not rule on any of the claims they are making in their main suit and they are not even claiming 50% of our Dad’s estate in their main suit. So, the social media reports are bizarre and at odds with the court’s order that one can only conclude that the reports were either sponsored by Helen Prest or issued by her supporters for mischievous purposes.”

The third child of Mrs. Oluwayemisi Ajayi, Mrs. Omolade Soetan (Nee Ajayi) also narrated that the orders were fraudulently obtained as no hearing notice was served on our Mum or the company or their lawyers, Kunle Adegoke & Co. “The court had previously granted certain interim orders (also in the absence of the Defendants) on 5th August 2021 and our lawyers had earlier filed an application to set aside those interim orders and the application was pending before the Court when the court made its September 7 order which is still pending before the court.

Helen Prest and her lawyers exhibited the highest level of desperation by pretending to have served our Mum with a hearing notice whereas they never did. They obtained the orders of the court fraudulently and our lawyers are taking the appropriate steps in this regard” she added.

Mrs. Omolade Soetan further stated that, just a few days before the court’s September 7 order, the Plaintiffs had served a counter-affidavit against the application filed by our mother to set aside the August 5 interim orders obtained by Helen Prest, which were based on the same information as the September 7 order.  “So, it was abundantly clear that the Defendants would not miss an opportunity to be heard on any other orders that the Plaintiffs were seeking. The Plaintiffs have become so desperate that they do not mind to win the matter fair or foul,” she said.

Mrs. Deru went on to say “regardless of whether there was any evidence of the service of a hearing notice before the court, it is quite puzzling that the judge would disregard our mother’s application to set aside its earlier orders that was before it and went on to hear the Plaintiffs’ application without giving the Defendants another opportunity to appear before the court.”

When asked if she and her siblings were ready to accommodate Helen Prest’s daughter, Tomisin, in the estate of their father, Mrs. Deru said that that has always been the case.

According to her, even though their Dad never introduced Tomisin to any member of the family as his daughter, they chose from the outset to accept her as their Dad’s daughter in good faith. “In fact, shortly after our Dad’s funeral, we wrote to Tomisin to join as an administratrix in our application to obtain Letters of Administration for our Dad’s estate, but Tomisin turned down the offer preferring to go it alone.  We later discovered that Tomisin and her Mum had shamelessly filed for Letters of Administration several months before our Dad’s funeral,”.

According to Mrs. Soetan, many things that Helen Prest has done since their Dad’s passing, has shown to them that her plan is to get not only a share of the estate for herself, notwithstanding that she was just a mistress, but to get more than half if not the entire estate to herself and her daughter.

Speaking about Helen Prest, Mrs. Deru said “the truth is that she’s a woman that aggressively pursues a public perception of grace and class, but she has shown us that all of that is just a huge façade – in reality,  she is a shameless and classless woman.

She wants a recognition that our Dad refused to legally grant her during his lifetime.

She further narrated that their mother, Mrs. Oluwayemisi Ajayi, remained the legal wife of her father till death as the couple never divorced and that the funny narratives being spurn by Helen Prest are just meant to cover the fact that she only engaged in an illicit relationship with their father which produced Tomisin. She concluded that such a relationship, would never make Helen Prest a wife or a beneficiary of their father’s estate.

The matter before Justice Ringim has been transferred to the Administrative Judge for re-assignment and no date has been fixed for further hearing.