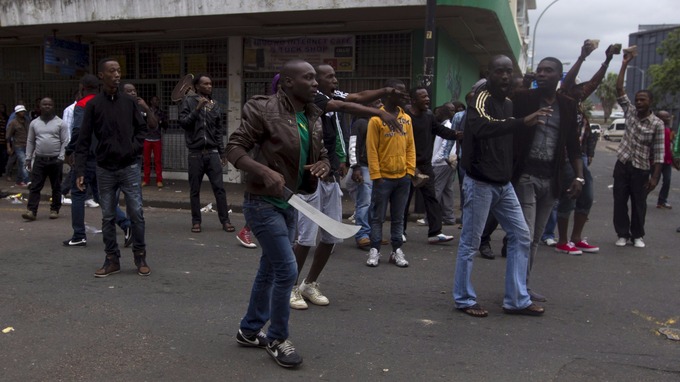 A fresh round of violence is currently building up in the streets of Johannesburg, South Africa, as armed protesters are out again, demanding that for

A fresh round of violence is currently building up in the streets of Johannesburg, South Africa, as armed protesters are out again, demanding that foreigners should return to where they came from.

According to Sowetan Live, a South African newspaper, the protesters, who carried weapons such as knobkerries, are waiting to be addressed by Mangosuthu Buthelezi, a notable politician and Zulu tribe leader. This is coming one week after attacks on foreigners sparked reactions across the continent.

Nigeria, Rwanda and Malawi had pulled out of the World Economic Forum which held in South Africa while Zambia cancelled an international friendly match with South Africa over the violence against foreigners. In reprisal attacks in Nigeria, South African-owned businesses were targeted. An MTN office was burnt down in Ibadan, Oyo state, while another office of the telecoms giant was vandalized in Abuja.

MTN had to shut its offices nationwide. Shoprite outlets were also targeted in Lagos, forcing the company to halt its operations across the country. The South Africa High Commission in Nigeria also suspended operations. During an assessment tour of some of the affected places, Babajide Sanwo-Olu, governor of Lagos state, said 5,000 people were currently out of jobs as a result of the reprisal.

The police announced that 125 persons have been arrested in connection with the violence while South African authorities said over 400 persons were arrested. But amid the rift between Nigeria and South Africa, Naledi Pandor, South African minister of foreign affairs, said many Nigerians were involved in drug trafficking. A comment which irked Geoffrey Onyeama, her Nigerian counterpart, who accused her of fuelling xenophobia.

In its report on Sunday, Sowetan Live said the leadership of hostel dwellers in Johannesburg has asked the government to engage the citizens about finding solutions to the clashes with foreign nationals. He said the residents were angry at jobs being take by foreign nationals, unhappy about drugs and RDP houses being owned by foreigners.