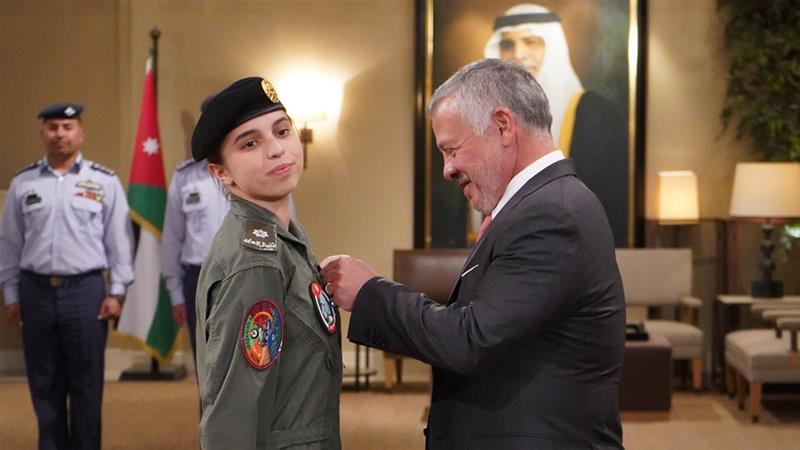 Jordan’s Princess, Salma bint Abdullah became the first woman in her country to pass her theoretical and practical pilot training with the Jordanian A

Jordan’s Princess, Salma bint Abdullah became the first woman in her country to pass her theoretical and practical pilot training with the Jordanian Armed Forces. According to a statement from the Royal Hashemite Court, the 19-year-old completed her pilot training on fixed-wing aircraft.

The princess, who previously graduated from a short commissioning course at the Royal Military Academy Sandhurst in November 2018, was presented with her aviation wings by her father, King Abdullah, at the Husseiniya Palace in the capital Amman on Wednesday.

The ceremony was attended by her mother Queen Rania and her older brother, Crown Prince Hussein. Her brother, who is a first lieutenant in the Jordanian Armed Forces, took to Instagram to congratulate his sister.
“Brilliant and hard-working as always!” he wrote. “Congrats on receiving your wings and here’s to more success and achievements.”

The Jordanian royal family can count a few of their members as Sandhurst alumni, such as the late King Hussein, King Abdullah and Prince Hussein.

Princess Salma, however, is not the first female to graduate from the UK-based military academy. Her paternal aunt, Princess Aisha bint Hussein, was the first Arab woman to attend Sandhurst and graduated in 1987. She later went on to serve in Jordan’s special forces. Another aunt, Princess Iman, graduated in 2003.